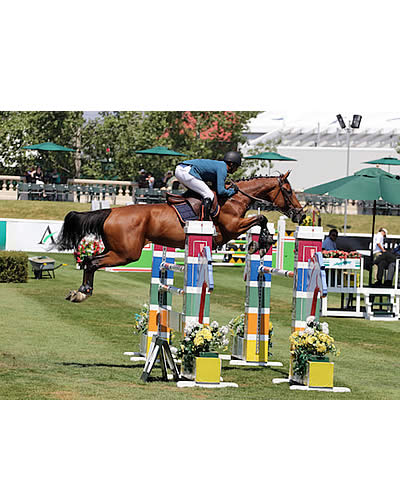 Pablo Barrios led the victory gallop in the $34,000 Friends of the Meadows Cup 1.50m riding Emanuel Andrade’s Fananka A in the Meadows on the Green. Out of 48 entries, 13 cleared Guilherme Jorge’s (BRA) speed track, and Barrios and Fananka A blazed the winning time of 56.73 seconds. Hardin Towell (USA) and Jennifer Gates’ Lucifer V finished second in 56.91 seconds, and Rodrigo Lambre (BRA) placed third aboard Mario Onate’s Charielle, with a time of 58.09 seconds.

Barrios has had great results throughout the summer at Spruce Meadows, but this was his first international win of the series. Fananka A, a ten-year-old Belgian Warmblood mare (Chin Chin x Kannan), is a new mount for the rider this summer and he explained that Thursday’s course suited the horse perfectly.

“I am happy that I finally got one victory,” Barrios stated. “I never expected to have it with her because she is just a new ride for me. Emanuel let me ride her because I was a little short on FEI horses. Basically, we trained her to do the derbies. I was a little unlucky in both derby competitions, but she placed in both.”

“Finally, this course was perfect for her,” Barrios continued. “When I walked the course I really liked it for her. It was long lines for a big horse and she has a big step. Two of the tightest turns were to her good side on her left lead. Everything was perfect for her, so I went for it to see if I could win and I was lucky.”

“She has a very different style,” Barrios said of Fananka. “The quality is top; I have never ridden a horse with that much quality, but the rideability is a little tough. You have to place her in a distance that she feels comfortable. Normally, she gets deeper than what you want or she will put herself in a place that you think she is in trouble, but she is so careful and she tries so hard. I do not know how, but she leaves the rails up.”

Further detailing his round, Barrios explained, “I was fast in the rollback from number three to the plank. Then I was the only one in the competition who did seven strides to the combination. She has a huge step and she goes a little left, so I planned the seven and it worked perfect. I think I was very quick there; everybody was doing nine or eight strides. Then I was fast in the rollback after the liverpool. Again, she goes left and she turned great, so I made good time there.”

On Friday, Barrios plans to compete ZL Group, Inc.’s Zara Leandra in the $85,000 Ashcor Technologies Cup 1.55m. The mare has been competing very well and he hopes to jump her in Sunday’s $400,000 Pan American Cup, presented by Rolex, to conclude the Summer Series.

McArdle Opens with a Win

International competition at the ‘Pan American’ Tournament got underway in the North American Ring Thursday morning with a win for Abigail McArdle (USA) and David McArdle’s Cosma 20 in the $34,000 Friends of the Meadows Cup 1.45m. Held over a one round speed track set by Anthony D’Ambrosio (USA), the competition saw 50 competitors with 14 clear rounds. McArdle and Cosma 20 clocked in at 65.90 seconds for the win.

McArdle and Cosma 20 have been a winning team for several years, and the 12-year-old Hanoverian mare (Couleur Rubin x Stakkato) proved why she is a winner on Thursday, speeding through the course and giving a little extra effort at the end.

“I got lucky,” McArdle detailed. “She lost a shoe and she slipped a little bit on the way to the last line, but she still true blue left the ground for me and had a super finish.”

Thursday’s win marks the pair’s third victory in the 1.45m division for this year’s Summer Series and McArdle explained that the venue suits her horse well.

“Spruce Meadows is a great venue for her because of the grass fields; she is able to really gallop,” the rider explained. “In today’s course, the way the numbers were, she was able to keep a big stride and a big gallop where the other horses had to steady in the lines. She is also really quick away from the fences.”

“It is important to remember with her that where other people may leave out strides in the lines, I have to not get so focused on that and really try to make it up in the turns and always just stick to my plan,” McArdle added. “We have had a super partnership. I consider her the best 1.45m speed horse there is. She is super careful.”