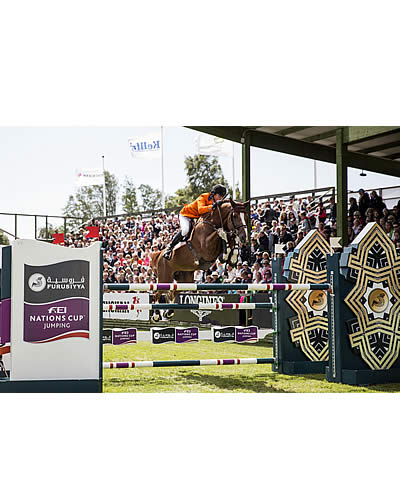 Falsterbo (SWE), 10 July 2015 – The Dutch showed precisely why they are the reigning World and defending Furusiyya champions when soaring to victory at the sixth leg of the Furusiyya FEI Nations Cup™ Jumping Europe Division 1 League in Falsterbo, Sweden today. It took just three of the four members of Rob Ehrens’ side to clinch it when Harrie Smolders, Maikel van der Vleuten and Leopold Van Asten all jumped double-clear, leaving anchorman Gerco Schroder with nothing to do for the entire afternoon but to watch from the sidelines.

There were five nations chasing qualifying points for the Furusiyya 2015 Final in Barcelona in September and it seemed that the Germans, who were also in the hunt, might force the eventual winners into a third-round jump-off. But in the end they had to settle for joint-runner-up spot along with their hosts from Sweden, while Switzerland slotted into fourth ahead of Spain in fifth and USA in sixth place.

The extraordinary run of Di Lampard’s British side ground to halt today, when the country that has enjoyed three victories so far this season lined up seventh despite a fantastic double-clear from anchorman Michael Whitaker. Team Poland finished last, hampered by a fall for anchor partnership Piotr Morsztyn and Osadkowski van Halen at the penultimate oxer in the opening round.

It appeared that course designer Christian Wiegand from Germany had not over-taxed them when 13 horse-and-rider combinations jumped clear in the first round. But that didn’t mean there wasn’t plenty of drama, with American chances taking an early hammering when Kirsten Coes’ stallion, Czardas, pulled out at the open water at fence eight before taking it on at his second attempt. And the British also got off to a disappointing start when William Funnell’s stallion, Billy Congo, was eliminated for throwing in the towel at the Longines triple combination. This fence was followed by a water-tray oxer that regularly hit the dirt, while the one-stride double at fence seven also took its toll.

The narrow vertical that followed the open water took some riding for those with onward-bound horses, but the final line of oxer to vertical at fences 11 and 12 proved particularly influential.

There was another dramatic moment in the second round when Spain’s Alberto Marquez Galobardes was forced to retire after his left rein broke on landing over the second fence with Belcanto Z. However, his team fought on to take some much-sought-after last qualifying points at the end of the day.

The real battle was played out by the other four points-chasing countries, the Dutch and Germans neck-and-neck on a zero score at the halfway stage followed by the Swedes and Swiss with four apiece. Like Dutch Chef d’Equipe, Rob Ehrens, Otto Becker hadn’t held back on his selection for the German side, and when Patrick Stuhylmeyer’s Lacan hit the middle element of the Longines triple first time out it didn’t matter because his fellow-countrymen had already racked up foot-perfect runs. But second time out, pathfinder Marcus Ehning and his exciting new stallion, Comme Il Faut 5, hit the first element of the triple combination and although both Janne Freiderike and her classy gelding Goja 27, and Mario Stevens and Brooklyn made no mistake, three more clears from the Dutch put major pressure on fourth-line rider Stuhylmeyer second time out.

By now the Swiss had lost their grip with eight faults to add, but the Swedes held firm with three great clears. Peder Fredricson’s brilliant campaigner, Lunatic, was officially retired before the class began this afternoon, but the rider has found a lovely stallion to follow in his footsteps in the nine-year-old H&M All In who never touched a pole all day. And although Douglas Lindelow and Casello fell victim to the penultimate oxer this time out, both Helena Persson (Bonzai H) and Henrik von Eckermann (Cantinero) left all the poles in place to ensure they completed on their first-round tally.

The Dutch could be seen checking the jump-off course before last-line German, Stuhylmeyer, came into the ring because if he left all the timber up then it would come down to a two-way ride-off to decide the result. However, when Lacan hit the middle element of the Longines triple combination it was all over, and the Dutch would have their day once again.

Dutch Chef d’Equipe Ehrens said, “Gerco didn’t touch a rail today but he still deserves the win because he has been a key member of the team for so many past events. We struggled a bit at the beginning of the season because of small things. We had to replace combinations, etc., so the victory today is a matter of working really well together. There is an enormous team spirit and only a small phone call was necessary to get them to come to Falsterbo. Everybody is on same line and has the same goal – winning – and when everybody works together it achieves great results. We have all the riders, owners and sponsors behind us, and the crowd were fantastic today; this is a brilliant place to win!” he added.

Pathfinder Harrie Smolders said, “In a Nations Cup you never know how it’s going to turn out, but we were really focused on today and our four horses and riders are in great shape at the moment – for us this is mission accomplished!”

He’s one of several Dutch riders fighting for a place on his country’s team for the FEI European Championships at Aachen, Germany next month. When asked if he felt he was a likely contender, Smolders replied, “For sure Rob will have been looking at all the performances; particularly in the Nations Cup, it’s always a great opportunity to see riders under pressure. I hope he liked the way we went today, but in Holland we have six or seven combinations able to jump on the European team and it comes down to his [Rob Ehrens’] choice in the end. I’m really pleased with Emerald though; he always had the talent but this year he’s really showing the benefit of the experience he has gained over the last few years and he’s full of confidence.”

Today’s result sees the Swedes and Dutch move up behind France at the top of the Furusiyya FEI Nations Cup™ Jumping 2015 Europe Division 1 leaderboard, but for many of the other teams there is still plenty more work to be done. Despite their great season to date, the British were only on a points-gaining mission at two of their three winning venues and will be hoping to improve their seventh-place position over the remaining two legs of the series at Hickstead (GBR) in two weeks’ time and Dublin (IRL) a week later. Each country has four qualifying opportunities during the season, and with only one more left to go, Team Germany, now lying fifth, will be feeling some of the heat at Hickstead.

For further details of the 13th leg of the Furusiyya FEI Nations Cup™ Jumping 2015 Europe Division 1 at Falsterbo, Sweden, visit www.falsterbohorseshow.com or contact Press Officer Lisa Johansson, Email press@falsterbohorseshow.com, Tel +46 708 924838. The next leg of the series is round 5 of Europe Division 2 which takes place in Budapest, Hungary on Friday 17 July. For all information on the Hungarian, fixture see www.csiobudapest.hu or contact Press Officer Nora Zajonkovsky, Email prosperik@invitel.hu, info@csiobudapest.hu.

8 nations competed, and the winners were the reigning world champions and defending Furusiyya FEI Nation Cup™ Jumping title-holders from The Netherlands who finished on a zero score.

Such was the strength of the winning team that last-line rider, Gerco Schroder, did not have to jump either round with Glock’s Cognac Champblanc as none of this fellow-countrymen lowered a fence all afternoon.

5 nations were chasing points towards the Furusiyya 2015 Final which will take place in Barcelona, Spain in September – Germany, Netherlands, Spain, Sweden and Switzerland.

13 clears in first round.

2 eliminations – for Great Britain’s pathfinder William Funnell when his 14-year-old stallion, Billy Congo, refused twice at the Longines triple combination in round one, and for Polish anchorman Piotr Morsztyn for a fall with Osadkowski van Halen at the penultimate oxer.

1 retirement – by Spain’s Alberto Marquez Galobardes and Belcanto Z when the left rein broke after they jumped the second fence in the second round.

Time-allowed over the 12 fence-track in round one was 83 seconds. In round two, three fences were raised in height – the vertical at four, vertical with water-tray at 6 and the vertical second element of the double at fence seven.

Sweden and Germany shared runner-up spot when each finished with a four-fault total.

Jan-Olof Wannius, President Falsterbo OC: “I always said from the beginning of the show that the Netherlands would be the favorites to win! They have come with such a strong team and they needed the points so they were really focused. Congratulations to the Dutch!”

Gerco Schroder NED: “I didn’t have to ride today but I’m feeling fantastic! My colleagues did a great job – usually you have to ride at least one round, but I am very happy for the job they did!”

Harrie Smolders NED: “I’ve had Emerald since he was six years old and this year he has been really consistent – he’s been jumping really well everywhere he goes.”

Mikael van der Vleuten NED: “It is important to bring horses in good shape and consistent to the Nations Cup and it is important that we riders try to make no mistakes. We all need very good horses for this level. We have tried to bring the best horses and riders at the moment, so we are very happy today!”

Dutch Chef d’Equipe Rob Ehrens: “It was nice course: nicely built and fair for the horses.”

Harrie Smolders NED: “To have three riders with a double-clear result is always impressive and Gerco didn’t even have to go in either round. He deserves that because so many times he is the one we all rely when it comes down to it.”

Leopold van Asten NED, when asked if he felt under pressure when going third for his team in the second round today: “Mikael and Harry were both clear and Gerco would surely be good too, so it took some of the pressure away. My horse jumped both rounds really well.”

Harrie Smolders NED, talking about today’s course: “When we walked it I thought it was not too big but the oxers were wide. At the end of the competition you could see that the teams fighting for points were very close, so the course designer created a very exciting class.”