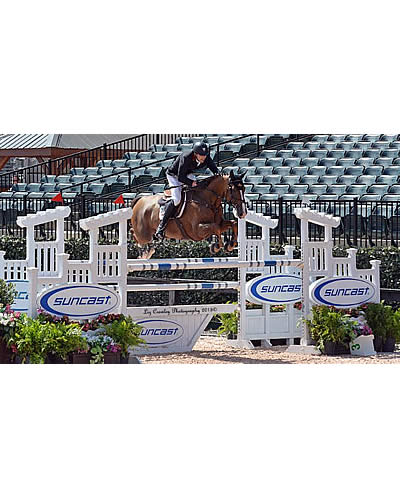 Mill Spring, NC – July 9, 2015 – The luck of the Irish continued in the George H. Morris Arena at Tryon International Equestrian Center (TIEC), as David Blake (IRL) aboard Binkie, owned by Pine Hollow Farm, captured their third FEI win at TIEC this season. Blake piloted Binkie to the only double-clear round in the $34,000 Suncast® Classic 1.50m FEI, edging out Alison Robitaille (USA) and Cassinja, who dropped a rail in the jump-off, finishing in 39.84 seconds. Blake and Binkie crossed the timers in 45.38 seconds with a clear round in hand to secure the win. Kristen Vanderveen (USA) and Bull Run’s Testify finished in third, with a single time fault in the first round of competition. Tryon Summer 2 continues through Sunday, July 12, with the entire Summer Series concluding on July 19.

Binkie and Blake have made their mark in the George H. Morris Arena at TIEC, collecting several wins and top finishes throughout the Tryon Spring and Summer Series, with a highlight win in the $127,000 Adequan® Grand Prix on June 27 during Tryon Summer 1.

Blake drew the last ride in the first round of competition on Thursday, a situation he has become accustomed too, also riding last in his win two weeks ago. With a tough track designed by Ana Catalina Harris (MEX), Blake was able to observe and find the best possible route to cross through the timers with no faults.

“I had a lot of time to watch and figure out the course today. I got a great draw in going last. I thought the end of the course was causing a lot of problems. Having a time fault or knocking the double down seemed to be the struggle, so I knew I needed to be careful, but also keep a close eye on the time,” he remarked. “It was hard to deliver both, which is where a lot of riders got caught. I decided to open up a bit on the backside of the course and I rode it so that the double was almost slowing down and that helped me with time and jumping through clean. It worked out really well.”

Blake explained that going last in the order has allowed him to give his 2006 Dutch Warmblood gelding (Larino x Whisper B) several educational rides, but the position does give the rider a mental edge. Blake has proven he can overcome the pressure to ride consistent fault-free rounds in make-it-or-break-it circumstances.

“I was in the same scenario during the grand prix two weeks ago and it’s a nice position to be in, but also puts on a lot of pressure on to get the job done. I know he’s a great jumper and I never really worry about him pulling a rail. I absolutely trust him and feel confident that he can go around clean every time we get into the ring,” commented Blake.

The duo’s consistency has kept them atop the leaderboard in the larger FEI classes offered at TIEC amongst a slew of talented international names and Blake sees Binkie as a real contender at the top levels. His laid back personality and willingness to fight in the ring are all signs that the best is yet to come.

“He’s been incredibly consistent for me since his first win at Spring 7. That was the first time that we really started to bring him out at this level. He’s young and I always have to remember that because I don’t want to overdo it,” he said. “We’re lucky that so far he hasn’t had to go very fast in the jump-off and that’s better for a young horse. He’s getting great experience and I’m thrilled with him so far this season.”

Giving Binkie time to recuperate from a string of stellar performances at Tryon Summer 1, Blake was impressed with the gelding’s efficiency and carefulness in the ring today. “He felt super. He had last week off and it’s great for him to come back now in the same good form he left with after his big win on Saturday night,” he said.

“The prize money here is as good as anywhere in the world and we’re in top form here,” added Blake. “The team and the horses are happy and I am truly grateful for the opportunity. I’m thankful to the Dvorkin family and the Pine Hollow Farm team for making these wins possible. It wouldn’t happen without them.”

Haley Gassel of Lenoir City, TN made a swift move up the leaderboard in the $10,000 Under 25 Welcome Classic aboard Quite Dark 2 owned by Westwind Equine Training Center, as the last rider on course in the class of 23 entries. Gassel and Quite Dark 2 tripped the timers in 33.743 seconds to edge out Kira Kerkorian of Sagaponack, NY and Cassi, who placed second in 33.864 seconds. Lucas Porter of Bartonsville, TX and Phineas finished in third place with a time of 34.24 seconds. The class was postponed from its scheduled Wednesday finish to Thursday morning as a result of inclement weather.

Gassel piloted Quite Dark 2 to victory in an immediate jump-off format. Gassel and “QD”, as she calls him around the barn, are coming off of a third-place finish in last week’s $15,000 Under 25 Grand Prix and captured their first TIEC win this season today.

“I thought it was very reasonable for a Welcome. I didn’t think it was too big for this early in the week and it was technical, which proved to be difficult. The time allowed was tight and usually I have time faults, so I was a bit nervous about that going in,” she explained. “It ended up working out great – you have to make these courses hard enough for this level of competition.”

Gassel’s massive 2005 Holsteiner gelding (Quality x Elegaz) has an aura about him in the ring and his confident attitude allows the duo to immediately find their stride in big-atmosphere arenas.

“He’s really strong and his size can be intimidating. He’s about 17.3 hands and has a very stocky build, but he is brave and always takes me to the jumps,” she explained. “I could miss or I could be spot on and I know he’s always going to get to the other side. He loves being in the spotlight and that’s why he excels in these types of classes.”

Gassel and Quite Dark 2 will be back looking to add to their top placings on Friday in the $25,000 Under 25 Grand Prix in the George H. Morris Arena. As the pair generates more buzz around the show grounds, Gassel is hoping that one day she will be able to represent the United States in team competition like a Nations Cup, as she represented Zone 4 at the 2014 Adequan® FEI North American Junior & Young Rider Championships and thoroughly enjoyed riding with a team.

“It was a great experience and QD really took it in stride. I loved the team competition atmosphere and would love to have the opportunity to do it again. We started off at 1.20m and have worked up from there pretty quickly. They’re big goals, but that’s part of the fun too, getting there and enjoying the process,” she smiled.

“She’s just six and we imported her this spring. We’ve been taking it slow and doing a few shows here and there and some training at home,” said Geitner. “This is probably her third show in the U.S. and she really came into her own this week. She’s just the coolest little mare and was super today.”

The mare finished with blue ribbons in both over fences classes in yesterday’s portion of the division with Geitner piloting from the irons, also collecting a second place in the under saddle hack.

“She’s a super jumper and is so brave. She has a ton of scope and when I go in there I don’t worry about the jumps at all, it is more on keeping her focused and helping her learn what her job is in the ring,” she explained.

Keepsake has incredible natural ability and will make an excellent prospect for the future. Geitner is looking to move the mare to the First Year division when they return to Florida for the winter season.

“We’re bringing her out slowly and taking our time because she’s really nice and I think she is going to be amazing next year as a First Year,” remarked Geitner. “We’re being very picky about which shows we take her to and are keeping it completely positive for her. I’m really thrilled with the way she’s coming along.”

As for beating her husband, Geitner was all smiles and said it takes a very special horse to get her back in the ring and the little mare convinced her to give it a go.

“I really don’t compete that much. I like to focus on training and coaching our juniors and amateurs, but this mare is also small and fit me a little bit better than she would have fit Daniel,” she laughed. “We’re really excited for her future and I’m glad that I was able to really show her off here this week.”

Competition at TIEC continues tomorrow with the $34,000 1.45m FEI Speed Stake, $5,000 USHJA National Hunter Derby, and the $25,000 Under 25 Grand Prix. For a full list of results and a weekly competition schedule, please visit www.tryon.com. Please “Like” the TIEC Facebook page at https://www.facebook.com/pages/Tryon-International-Equestrian-Center to be eligible for various contests and promotions.