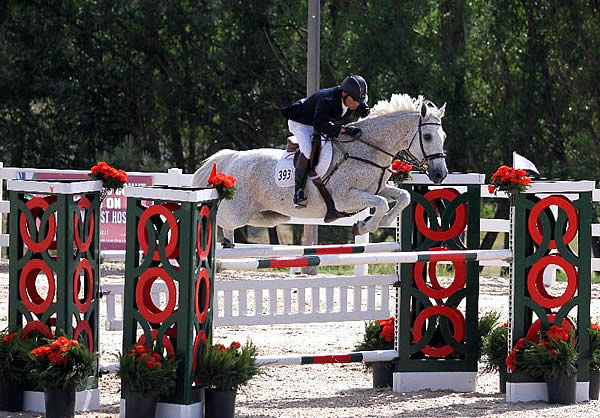 Parker, CO – June 15, 2013 – Summer in the Rockies II Grand Prix, presented by Littleton Equine Medical Center and Platinum Performance, was well attended and spectators lined the grass bleachers and VIP area on a mild summer day. Much needed rain could be seen far in the distance but Mother Nature held off the showers with perfect timing, letting go in a brief downpour as the victory gallop ended. Brian Curry, Vice President and General Manager of the Colorado Horse Park announced that the Black Forest area wildfire is now 45 percent contained. He led the audience in a moment of silence for the couple who tragically lost their lives in the blaze.

During the late afternoon event, 20 horse and rider pairs tried their hand at Danny Foster’s grand prix course in the Kathy and Brad Coors Family Grand Prix Arena at the Colorado Horse Park.

“I try to make the course difficult for the riders,” said Foster, a Gold Medalist at the 1991 Pan Am Games for Canada, a former chef d’équipe of the Canadian show Jumping Team and an international course designer.  “These horses jump every week on a circuit like this.  The main thing as a course designer, I feel it is really important to be sensitive to the horses. They could go for six weeks twice a week.”

Foster was pleased with the outcome of the Grand Prix and the course he designed.

“I thought the poles came all over the place – there wasn’t a bogey. You had to make some good answers to some pretty tough questions. The young riders that participated looked like they got pretty positive mileage from it.”

John Pearce had clear first rounds on all three of his entries: Son of a Gun, Johnny B Good and last week’s Summer in the Rockies I Grand Prix winner, and veteran grand prix winner, Chianto, all owned by Forest View Farms. Armando Hassey and Taggert Enterprises LLC’s Eminem also went clear to return. Bjorn Ikast had two fault-free rounds, first with his own Royal Flush and another with Bovee Limited Liability’s Colorado, winner of this week’s Welcome Stake.  Bull Run’s Eternal with Kristen VanderVeen in irons, also progressed to the short track, skillfully executing the course while leaving all the poles in their cups.

Foster’s jump-off course included some really exciting long gallops that kept the crowd of spectators on the edge of their seats.

First back was Ikast aboard Royal Flush. The pair went clear and set the time to beat, 47.920. Next, Pearce and Johnny B Good accomplished another clean round in the time of 43.728. Then, VanderVeen returned on Bull Run’s Eternal and sped through the course deftly and faultlessly beating Pearce’s first round with a time of 42.084.

Then it was Hassey’s turn aboard Eminem. The pair had a rail, and then opted to take it easy finishing the short course in 49.555. Colorado and Ikast followed suit, becoming the second four-faulter with a time of 48.382.

It was up to Pearce to best VanderVeen’s time if he was to take the prize. He still had two rounds to go, one with the very fast Son of a Gun and one with his long-time partner Chianto. With Son of a Gun, Pearce was clean and fast with a time of 42.100, but not fast enough to beat VanderVeen.

It now came down to his round with Chianto but it was not in the cards. Chianto had a rail at the first fence and had a time of 43.601. VanderVeen and Bull Run’s Eternal maintained the lead and earned the win.

“I thought it went great,” said Foster. “Those guys were trying against each other, back to back. It was good sport today. I thought the best had the opportunity to rise to the top. Kristen was superb to win and rode with a lot of skill. She rides beautifully. The horse is fantastic and she’s a hard worker. The good ones always find a way to win in the end, don’t they?”

“I loved it from the second I walked it,” said VanderVeen about Foster’s course. “For me the Welcome was a little bit difficult. So I was worried about how the Prix would be built today. But it was smooth; everything rode nice; the lines were nice. We were fast in the jump off! It was a quick enough jump off and it was across the whole ring a few times and the footing was great. I didn’t slip once and I was going as fast as I could. I couldn’t be more thrilled.”

“He’s been money for me,” she said of Bull Run’s Eternal. “We imported him this winter and right away he was second in a class at WEF in Wellington. He jumped the night classes. I’ve never really gotten to do that before. He’s only 10 years old. I have high hopes for him.

“She had to beat three great horses with John Pearce and he is a super rider,” said Keith VanderVeen who flew in to watch and be with his daughter for Father’s Day. “This is the best Father’s Day present!”

“Kristen was really good,” Pearce said. “Her horse has a huge stride. That was definitely what got me. It was a great day. It was a lot of fun. The horses all finished sound and happy and that is what is important. In any sport you just never know what’s going to happen. That’s why you can never get too big an ego.”

“It was a beautiful day. It is a beautiful horse show,” said Foster. “I think that people should know they have a good thing going here and they’re growing. Of all the years I’ve been involved with the show, it seems to be on the uptick. The level of the sport here is getting better and better all the time. The footing is great and it supports it. They stage very good sport and that is what people want.”