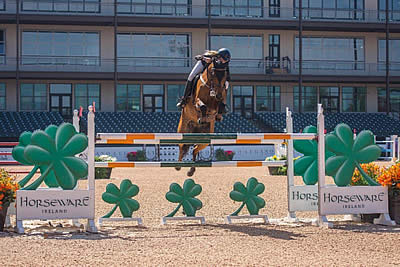 Thirty-three entries tested the Michel Vaillancourt (CAN) course design, with seven pairs returning for the jump-off round. Vanderveen and the 2009 Holsteiner gelding (Cardenio x Contender) owned by Bull Run Jumpers Six LLC have been moving up the ranks together, and “Prince” is beginning to take his place as a reliable member of her FEI string, Vanderveen explained.

“It is quite exciting to see him now more at the top [level], and I’m using him as one of my main horses. And this is actually my first class with him this week!” she added. “So, it was great for him to come out in kind of a bigger class and not need a warm-up.”

Vanderveen is heading to Europe this summer, and mentioned that Bull Run Prince of Peace is proving himself ready for the journey with his performance at TIEC over the last few weeks. “That [using him selectively] was something I was trying out, as I’m going to Europe soon and I’m going to be using him as one of my main horses,” she said.

The competitive field was no big deal for the pair, who bested the class by more than three seconds. “He’s naturally very fast, and he’s super careful,” assessed Vanderveen. “I can take a lot of risks, I think, through the turns, and just never [have] to really slow down because he’s always watching the rails by himself.”

Though Vanderveen is well-known for her success at TIEC with another mount, Bull Run’s Faustino de Tili, Bull Run’s Prince of Peace continues to rack up successes and his future is looking particularly promising, Vanderveen revealed. “I think he might end up being one of my best horses, so you never know, but fingers crossed. I hope to bring him along to be one of my top horses and jump the big classes,” she concluded.

Pablo Barrios (VEN) and Le Vio were one of only three pairs to go clean in both phases of Wednesday’s $6,000 1.45m Power & Seed Stake CSI 3* to take an early win in Tryon Spring 5 competition, clocking a first-round time of 37.71 seconds and producing a 33.543-second speed phase round. Savannah Jenkins (USA) and Quitana 11, a 2006 Holsteiner mare (Quick Star x Lucky Lionell) owned by Georgy Sarah Maskrey-Segesman, claimed second place with a speed-round time of 33.665 seconds, and Angel Karolyi (VEN) sped to third aboard Carol Rosenstein’s April Moon, a 2008 Holsteiner mare (Quinar x Landwind II), after clearing the speed round in 35.504 seconds.

Barrios and the 2009 Hanoverian gelding (Van Gogh x Drosselklang II) owned by Gut Einhaus LLC dominated the class and a competitive design by Michel Vaillancourt (CAN), proving to Barrios the quality of his horse, he explained. “This horse is jumping really, really good. I was very impressed because he’s not the most scopey horse, but he is very careful.”

Though he’s been riding Le Vio for about a year and a half, Barrios detailed that he’s been bringing this horse along to the 1.50m level and has already seen good success. “I started in the small classes and I moved up the last year doing night classes,” said Barrios. “He just came last week from a fourth place finish in a 2* class at Split Rock, and he won last summer in the Central American Games and also in Florida. A horse like this is always a winner; he always tries his best. He is a very competitive horse.”

After Wednesday’s solid performance, Barrios believes Le Vio is well on his way to success at the 1.50m and CSI 2* level, he emphasized. The pair will compete at TIEC for the remainder of the Tryon Spring Series before returning again in the Summer Series to keep furthering those goals:

Amberlee Wentz of Colorado Springs, CO and Dana Vollbracht’s Five Star came out on top in the combined Green Hunter 3’6/3’9/High Performance Division. The reserve champion title was awarded to Thomas Serio (Aberdeen, NC) and Moody Blues owned by GC Ponies for their performance on the week.

Wentz and Five Star have been paired since November, and is a horse that’s new to the Hunter division, she revealed. “We call him Jerry at the barn. He came from the Jumper division and we’re just bringing him along. He’s already qualified for Derby Finals this year.” She continued, “He just wasn’t quick enough to do the big Junior Amateur Jumper classes, which she [his owner] wanted to do on him, and he jumps really well with the Hunter look, so she decided that Hunters would be the best job for him.”

Five Star’s Jumper instincts sometimes show up in the Hunter ring, Wentz explained. “During the first round, being a Jumper, when we walked in, all of a sudden in the next ring over the buzzer toned, and he got a little bit awake in the first round. He had a decent round, but ended up third. He got down the diagonal line a little bit quicker than I thought we were going to, and just wasn’t quite as relaxed as he was yesterday,” Wentz recounted. “He rides great in the handy rounds, so I just had a good plan in the handy, did the inside turns, and he jumped great.