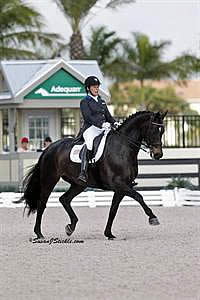 Wellington, FL – Ten teams of international dressage riders met on Friday for a chance to win the Wellington Nations Cup CDIO3* presented by Stillpoint Farm, America’s only CDIO3*. And though there was plenty of good competition, Team U.S.A. I (the U.S. was represented by two teams) was clearly the day’s best.

Total, seven horse/rider combinations earned scores of 70% or more. Three of them were on Team U.S.A. I. Leading the way were Kimberly Herslow and Kiroli Enterprises LLC’s Rosmarin. Their score of 72.079% was more than enough to win in the Prix St. Georges competition, and was the highest individual score of the day.

“It’s such a privilege to have a horse like Rosmarin,” said Herslow, “he gives me one-hundred and ten percent every time he goes into the ring and today was no exception. It was an honor to ride on this team and I’m so happy to have contributed.”

Team U.S.A. I also had contributions from Prix St. George pair Caroline Roffman and her own Her Highness O, and Grand Prix level riders Heather Blitz and Shelly Francis. Francis rode Patricia Stempel’s Doktor to a 70.213%, good for second place in the Grand Prix division, and Blitz rode her 2011 Pan American Games individual silver medalist Paragon to a 71.021%, good enough to win the Grand Prix competition.

“I’m very happy with how [Paragon] went today,” Blitz said after the competition was over, “it was one of my favorite tests, especially in the connection. He gets better in every test. He’s come a long way, but there’s still a lot left. [Today] was a great confidence builder and I’m excited to continue his training.”

Teams for the Wellington Dressage Nations Cup CDIO3* presented by Stillpoint Farm were made up of three or four horses and riders, not more than two of which could be Grand Prix combinations. The top three scores from each team were counted toward the final total. For each Grand Prix score in that top three, an extra 3 percentage points were added to the final team score (this format is the proposed format for the Pan American Games, and Friday’s Nations Cup was used as a test of that format). With the two highest Grand Prix scores counting toward their final score, Team U.S.A. I finished with a total combined score of 219.313, far and away the best team score of the competition.

Not to be too overshadowed though was second place finisher Team U.S.A. II. The team of Prix St. George riders Christopher Hickey and Justin Hardin, and Grand Prix riders Susan Dutta and Cesar Parra earned a total score of 208.675. For a minute, it looked like third place team Canada I (Canada was also represented by two teams) might take the runner up position, but a clutch 69.043% from Parra and Van the Man secured a second place finish for Team U.S.A. II.

“It’s always a privilege to ride on a team,” said Parra, after securing the second place finish. “My horse had a fantastic day and I was very pleased with our test.”

Competitors return to the ring Saturday for a chance at individual honors. The top finisher will be crowned by combining his/her scores from the Freestyle, performed Saturday, and Sunday’s test of either the FEI Intermediaire I or the FEI Grand Prix Special.

On demand video of every ride from the Wellington Dressage Nations Cup CDIO3* is now available at USEFNetwork.com.

Links to individual scores can be found at http://www.usefnetwork.com/overlays/517.aspx.