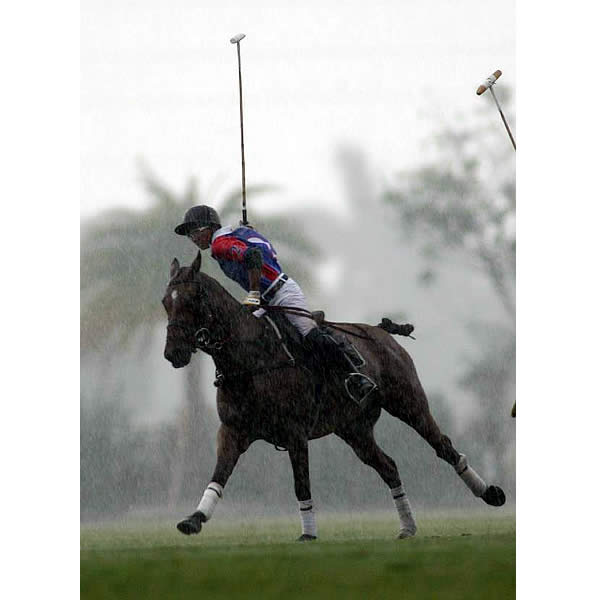 A light rain turned into a thunderous, driving rainstorm late in the opening chukker making conditions challenging for both players and horses.

Despite the wet field and steady rain, Team Re/Max was able to jump out to a 2-0 lead behind goals by Gina Padilla and Ross. Dan Haynia scored for Polo Gear/Palm Beach Rox before umpires called the game after one chukker.

Ross was named Tournament Most Valuable Player and Haynia was selected as Most Improved Player.

In addition to Ross, Ezequiel Ortiz Berne, Gina Padilla and pro Juan Bollini were members of the winning team.

“We’re happy to walk away with the trophy,” Ross said. “We won the first year and the last two years we were in the consolations which is still fun but it’s always nice to be in the running for the championship. When you get there it’s a wonderful experience.

“That first year was electrifying because it was such a new experience for all of us,” Ross said. “But this is pretty special, too.”

“All tournaments are important no matter where they are, but this one is special to win,” Ross said.

Under clear skies on Friday, Polo Gear/Palm Beach Rox advanced into the final with a thrilling 5-4 victory over Wellington Coalition on the opening day of the two-day tournament. Gordon W. Ross Team Re/Max advanced with a 5-3 win over Cedar Crest Stables in the other semifinal game.

In front of a record, festive crowd of more than 3,000 spectators, both teams were competitive from the opening throw-in.

Ross has competed in all four GPL tournaments.

“The skill has moved up a level absolutely,” said Ross, rated at 0 goals. “The players have increased in their level of play which is so great. It makes it more safer for all the players.

“We are here to have an experience,” Ross said. “All the teams this year were quite well-balanced. That’s what you like to see. You don’t want to see one dominating team because that’s no fun for anybody. Our game on Friday could have gone either way.”

Ross was thrilled to play with Bollini, a former 8-goal rated player from Argentina.

“He’s been great; we love him and we have played with him before,” Ross said. “He’s a great team leader and we enjoyed having him on our team. We strategized; we always do. It’s really important to follow your team leader.”

McKenney, GPL founder and polo player, a member of last year’s winning Gammu Mu team, supported the officials’ decision to call the game even thought it was bittersweet.

“Safety of the horses first and we wanted to make sure no one gets hurt as well,” McKinney said.

“It’s so, so bittersweet,” McKinney said. “First of all four chukkers are always better than one. We almost made it through the weather but it just didn’t cooperate the last few minutes.

“But overall it didn’t seem to dampen anybody’s spirits other than mine because I wanted to play,” McKinney said. “The exciting thing was it was two really great games on Friday and we all came in prepared to win it today. They got a better first chukker off us and they won, fair and square, one goal.”

For the second day in a row, 10-goaler Adolfo Cambiaso, the greatest polo player in the world, and his wife Maria were on hand to cheer on Gordon W. Ross/Team Re/Max.

Berne is a Cambiaso family friend and La Dolfina public relations man. He was a last-minute lineup addition filling in for an injured player who was unable to make the trip.

Berne, making his GPL debut, said he was thrilled to be part of the winning team although it will take a while for him to catch up to Cambiaso’s trophy case.

“This was fun and special and motivates me to play more and learn more,” Berne said.

It was also another huge step for the Gay Polo League, attracting new fans and hopefully, new members.

“Next year will be our fifth year,” McKinney said. “We had 10-goal and 7-goal professionals playing with us and Cambiaso was here watching us. That’s just extraordinary. We had players from Argentina, France and Canada playing. We really are an international event and I couldn’t be more excited. I am thrilled with it.”

The tournament was hosted by Grand Champions Polo Club and Marc and Melissa Ganzi. Melissa Ganzi, newly-elected president of the Museum of Polo and Hall of Fame, selected the well-matched teams and provided most of the ponies for the tournament including Best Playing Pony Baby, ridden by Christine Vermes in the consolation final.

The Gay Polo League, created in 2006, is an international organization and only known gay polo league in the world. Currently, the GPL’s established four U.S. chapters are in Los Angeles, San Francisco, New York and Wellington.

INFORMATION: There are great field side views for tournament action at the home base of pro teams Audi and Piaget and Polo School at Grand Champions. Everyone is welcome to watch polo in a relaxed atmosphere during the spring and fall tournament season and other special events including the International Cup in November, Buzz Welker Memorial Junior Tournament in March, Women’s Championship Tournament and Gay Polo League International Tournament, both in April.