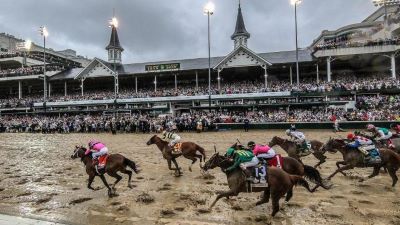 Interest in horse racing in the United States has never been higher, with increased media coverage helping to promote the sport to a much wider audience in recent years.

Nowhere is that point better highlighted than in the United Kingdom, where Sky Sports Racing broadcasts live action from the US on a daily basis. This has created a scenario where the top-class races in the US now attract significantly more international entries, thus boosting the quality of the action.

Read on as we take a look at the four standout events in the US racing calendar – the Kentucky Derby, Preakness Stakes, Belmont Stakes, and Breeders’ Cup.

The Kentucky Derby is a Grade I stakes race for three-year-old Thoroughbred horses held over 10 furlongs at Churchill Downs in early May. It is the first leg of the Triple Crown alongside the Preakness and Belmont, and generally attracts a field of 20 runners.

Horses can qualify for the event by accumulating points in a series of 35 races dubbed the ‘Road to the Kentucky Derby’, which take place at tracks across the US, Europe, and Asia.

Often called the ‘Most Exciting Two Minutes in Sports’, the Derby regularly attracts more than 150,000 spectators to Churchill annually.

Run over a slightly shorter distance of one and 3/16 of a mile, the Preakness Stakes is staged at Pimlico Racecourse on the third Saturday in May each year.

Attendance at the Preakness Stakes usually beats all other stakes races including the Belmont Stakes, the Breeders’ Cup, and the Kentucky Oaks. The only exception to this is the Kentucky Derby, which often attracts over 20,000 more spectators when it is staged earlier in the month.

Notable past winners of the Preakness include Secretariat, Affirmed, and American Pharoah, each of whom went on to complete the Triple Crown.

Traditionally the third and final leg of the Triple Crown, the Belmont Stakes is run at Belmont Park on the first or second Saturday in June. Run over one and a half miles, the race is widely viewed as the event which determines the best middle-distance horse in the US, according to the horse racing betting guide.

The most famous winner of the race was Secretariat, whose winning time 2:24.00 remains a track and world record for the distance on dirt.

Justify’s stunning victory under jockey Mike Smith in the 150th running of the race in 2018 saw him become the 13th Triple Crown champion.

The Breeders’ Cup World Championships is a series of Grade I thoroughbred races staged annually at different tracks in the US or Canada. It was initially a single-day event, before expanding into a second day in 2007 due to the enormous global interest in the meeting.