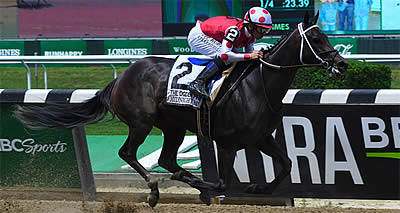 Gilbert, AZ – June 14, 2019 – On Saturday, June 8, the 151st running of the Belmont Stakes took place as the final leg of the Triple Crown series. While no horses were eligible for the coveted title this year, many young thoroughbreds were still fighting for a spot in the winner’s circle throughout the thirteen races leading up to and following the grand event. Running to victory in six of the races were American Equus Thoroughbred Jockeys Javier Castellano, Mike Smith, Manuel Franco, Corey Lanerie, Ricardo Santana Jr., and Irad Ortiz Jr.

Race 4 marked the first win of the day for the talented group of Chosen Riders. Castellano, who describes the Thoroughbred Racing Irons as “the best in the market”, and Rushing Fall led the pack in the Longines Just a Game race. Following behind Castellano in the race was Chosen Rider Ortiz Jr. aboard Beau Recall, giving American Equus a one-two finish.

Race 5 was next on the agenda as the Ogden Phipps Stakes. Hall of Fame Jockey Smith captured the win for American Equus. Relying on the durability of his trusty irons, Smith piloted Midnight Bisou to a first-place finish.

Coming off of his second-place finish in Race 5 with Come Dancing, Franco raced to first in Race 6, the Jaipur Invitational. Franco, sporting his American Equus Long Board Thoroughbred Racing Irons, rode World of Trouble to a garland of roses at the end of their seamless race.

Playing an integral role in the success of Lanerie and Hog Creek Hustle in Race 8, the Woody Stephens Stakes presented by Mohegan Sun, the ultra-lightweight irons offered stability as they crossed the finish line in record time.

American Equus put another consecutive win to its name during Race 9 when Mitole was ridden by Santana Jr. to success. Galloping swiftly behind Santana Jr. was Smith who rode McKinzie to second place in the race. Both riders were supported by their stirrups extra wide carbon fiber footbeds, giving them the ability to comfortably maneuver the young horses with ease to clinch the first and second place positions.

Hall of Fame Jockey Ortiz Jr. concluded the winning streak for Chosen Riders in Race 10. With Bricks and Mortar between the irons, Ortiz Jr. rode to victory in the Manhattan Stakes, adding yet another win to his 1,798 previous wins.

“All of our chosen riders did fantastic this weekend. Belmont is always a great race and we are proud to have such a large presence at this historic track,” reported David Shano, Founder and CEO of America Equus. “We are excited to see what all of our Chosen Riders accomplish over the summer!”