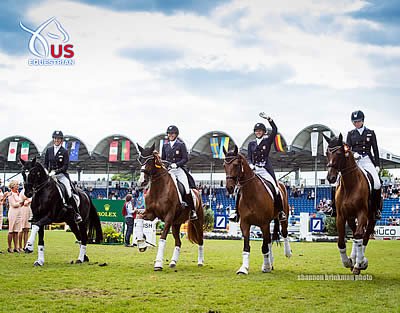 Aachen, Germany – The Dutta Corp. U.S. Dressage Team won the silver medal at the FEI Nations Cup at the World Equestrian Festival CHIO Aachen in Aachen, Germany on Saturday with a final score of 450.392. Rio Olympic team bronze medalist Laura Graves and Verdades were foot perfect as they bested the field of competitors, unseating Germany’s Isabell Werth in the Grand Prix Special to win with a final a score of 81.824%.

“These incredible young ladies are just super athletes along with super wonderful horses, some of which are brand new to arenas such as this,” said Chef d’Equipe Robert Dover. “I was over-wrought with emotion about them landing in second place halfway through this Nations Cup. On the one hand, a part of me expects that; I expect excellence. Still, it is an extra thrill to have this youthful look of new faces coming along with our seasoned veterans. I’m very happy and very excited about this group.”

Maintaining their silver status from Thursday’s Grand Prix, the U.S. had little to no room for error as they entered the arena. The 2016 Olympic duo of Graves (Geneva, Fla.) and Verdades, Graves’ and Curt Maes’ 2002 Dutch Warmblood gelding, kept the momentum going fresh off their Grand Prix test, where they placed second with a 79.514%. They were determined to keep the team on the podium by producing a showstopping performance in the Grand Prix Special.

“Today was just our day. My horse gave me a great birthday present,” said Graves. “It was actually the first time this year that we have shown in the [Grand Prix] Special. I could not be more pleased with him. Aachen brings out the top riders, and that’s what keeps me motivated.”

“A win in Aachen is tantamount to a win at the Olympics,” said Dover. “She was against the very best rider from the Olympic Games, the very best rider from the World Cup and when you beat that rider and horse, it’s just everything. When you go into the stadium and have our national anthem played and our flag go up, it is something she will never forget in her life. Nothing can make me more proud or happier for her.”

London Olympic veteran Adrienne Lyle (Ketchum, Idaho) aboard Salvino, the 2007 Hanoverian stallion owned by Salvino Partners, LLC, entered the ring confident and composed, demonstrating brilliant movements to finish on a final score of 71.814% and 73.608% in the Grand Prix and Grand Prix Special, respectively.

“Olivia is another incredibly gifted rider. She is as tough about wanting perfect and being determined,” said Dover. “Right before she went in I said rack up as many points as you possibly can in the first half of the test because his greenness is in the second half and that’s exactly what she did. That’s what you want in a team rider; it shows another great talent for the future.”

Graves’ Rio Olympic teammate, Kasey Perry-Glass (Wellington, Fla.), and Goerklintgaards Dublet, Diane Perry’s 2003 Warmblood gelding, had an unexpected miscommunication in their first pirouette during Thursday’s Grand Prix, resulting in a score of 68.929% which was the drop score for the team. However, the pair’s performance on Saturday set the tone for the U.S. with a score of 71.608%.

“We wanted Kasey to keep showing the continued evolution of how this horse is coming on,” said Dover. “It [Grand Prix Special] was so amazing and so lovely. The 74-75% is right there. I’m thrilled with her.”

Graves and Verdades placed third with a score of 82.550% in the Grand Prix Freestyle Sunday morning.