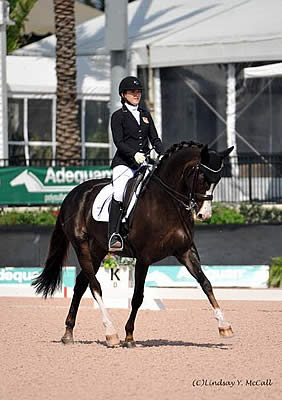 The Golden State Dressage Classic CPEDI3*, held at the Rancho Murieta Equestrian Center in Rancho Murieta, Calif. June 15-18, showcased veteran para-dressage riders and many new horse and rider combinations. The U.S. Team led by Chef d’Equipe Kai Handt included Katie Jackson and NTEC Royal Dancer (Grade V); Roxanne Trunnell with NTEC Daytona Beach (Grade I), Michele Bandinu with Soulman 13 (Grade IV); and Kate Shoemaker and Solitaire 40 (Grade IV). World Equestrian Games (2014) and Paralympian (2016) Roxanne Trunnell and NTEC Daytona Beach topped Grade I over the three days. “The first day was wonderful,” said Trunnell. “She pranced to a 69.571% the highest score of the day. Since Daytona is a big girl it takes her a little bit longer to get her back supple for that nice, swingy, forward walk that the judges want to see in the Grade I tests compared to the more compact horses. So to aid with this situation I did a lot of lateral work with her. Even with 100 degree temperatures Daytona was a soldier. Since Daytona has a long giraffe neck I’ve been playing around with her frame. She starts to get tense in the back when I have her really up in the bridle but when I warm her up where she is reaching for the bit and let her frame become more relaxed and natural to her, she rounds up nicely in her back and gets a relaxed swingy forward walk. I was happy how consistent she was that whole weekend.”

Trunnell added, “My coach and Chef d’Equipe Kai Handt has been helpful for not only the U.S. Team but for Daytona and me as a pair. An example of this is how Kai speaks about keeping a horse forward. He said, ‘a horse is like a Porsche: the engine is in the back. You ride a horse from the back first.’ Daytona is a horse that needs to be ridden from behind and that requires a tremendous amount of half-halts. Knowing that she is trained this way has helped me keep her responsive and pretty in the show ring by giving her little ‘wake-up calls’ in the form of half-halts from my seat during a test.”

Michel Assouline commented, “I was pleasantly surprised to find an overall good standard of riders and horses. The facilities were really stunning and well organized in Rancho Murieta. I liked the concept of mixing para-dressage and able-bodied dressage competitions which generates broader crossway interest. The horse and rider combinations looked good indeed with room for improvement. I felt the riders and their coaches all had the ability to enhance the skill sets needed to develop their horses’ performance. Everyone was so keen to learn.”

Assouline and Handt conducted this similar symposium on the East Coast just months prior. Assouline said, “I am happy to say there are equally good quality riding and horses on both sides. The depth on the East coast is obviously greater. In California we worked on Improving their horses’ way of going including throughness, connection, contact and activity. We also worked on test presentation and outline awareness; accuracy. In addition to picking up marks where it’s easy.”

Assouline concluded, “I enjoyed working with Kai very much. I was able to bring different approaches and structures to the established system which Kai seemed to have embraced. Riders benefited from a daily test review with video analysis which is an important step forward and aid in the way we should up our game. I also included videos of recent top European riders in action to create an awareness of where riders are at present, and where they have to go and surpass themselves eventually. In the US, para-dressage riders tend to compare themselves against one another because it’s the only option with the lack of international competitors, so we need to offer them European exposure in the form of videos for the moment, being the cheapest option. I intend to monitor progress through an online competition system too which is being set up by Laureen Johnson and the USEF IT Team. In the meantime several riders have been regularly sending video links for advice.”

Understanding what each athlete’s counterparts are showcasing in the international arena may be the key to the US riders earning medals at the world championships. Each year a handful of US Para-Dressage riders head overseas to immerse themselves within European competition. Annie Peavy headed to the Hartpury Festival of Dressage July 5-9, with Lancelot Warrior and Royal Dark Chocolate. Peavy explained, “Hartpury was great exposure with my new horse Cocoa. We learned a lot as a team; the more I get to know her, the more I love riding her. Both Cocoa and Lance traveled to England well; I am grateful to have two strong competitors. Our plans are to stay in England the rest of July and compete at Bishop Burton. I am thankful for my parents endless support along with my groom, Alex Philpin, and trainer, Heather Blitz.”

2016 Paralympian Margaret McIntosh will join Peavy in Bishop Burton this July. Along her side will be Michel Assouline’s wife and classical dressage trainer Mette. McIntosh said, “After hearing a resounding endorsement of her horse-hunting talent (she found both British Grade I team horses), I asked Mette Assouline to help me find a Grade I horse. Missy (Ransehousen) and I met her in Denmark in May, where we found Heros, a 13 year old, 16.1, dark brown Danish Warmblood mare. I am training with Mette at her farm in Colne Engaine, Essex, U.K. for the month of July with the CPEDI3* at Bishop Burton and Tryon in September as our goals. My regular coach Missy Ransehousen will be here at the end of July to help me at the show. I am so excited to have the opportunity to ride and train in Great Britain, the Mecca of Para Equestrian Dressage. Many thanks to my great support group, including Missy and Jessica Ransehousen, my family, especially Brian, and Assouline Dressage for helping me make this incredible journey happen.”

US Para-Dressage athletes will finish the summer off with the USEF Para Equestrian Dressage National Championship Sponsored by Deloitte in Tryon, NC. The Para-Dressage show is scheduled for September 14-17, 2017.

The United States Para-Equestrian Association would also like to mention four para-dressage horses that have passed this year. Rider Lara Oles lost her Bella earlier in the year, Katie Jackson lost her horse Wembley in April, Elle Faulkner lost Flash Dance in June, and Ashleigh Flores-Simmons lost Binero in July. The USPEA would like to express their sincere sympathy for each of these riders.