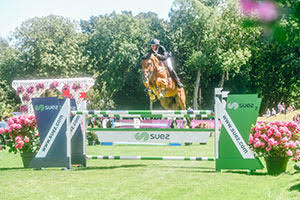 Sports fans had something to celebrate this Friday at Jumping International Dinard. With 8 events on the program of different levels, the public of the Val Porée equestrian stadium vibrated to the rhythm of riders’ and horses’ performances.

39 pairs were on the startlist of this Suez Grand Prix designed by Jean-François Morand over 1m55 fences, which was a preparation for Sunday Rolex Grand Prix of Dinard. Kevin Staut clinches victory with style.

If 11 riders managed to clear the course, Kevin and Silver stop the clock at 79’’32, and will remain below 80’’ for the rest of the class. Obviously happy, Kevin declared, “When you are at the beginning of the start list, you never know which is the right strategy, but that kind of showground suits him very well. Besides, Jean-François Morand designed a very fluid course; he knows the Val Porée stadium perfectly; it was very pleasant to ride. Dinard’s arena allows big horses to express themselves, while sometimes they might be frustrated in more reduced spaces. Silver started with Olivier Guillon. I have been riding him for two and a half year, mainly in Nations Cups, so he hardly competes in speed classes, but this winter, he won a big class against the clock in Doha, and came second in a jump-off with 10 pairs in Zürich. He performs better and better.”

The second position goes to the British Laura Renwick, riding Bintang, who clears in 81’’32. The double winner of the Derby Tropicana of Dinard (2015 and 2016) was smiling. “He was unlucky yesterday, but today he jumped very well. He will compete in the Grand Prix on Sunday.” The podium of this Suez class is completed by the German rider Hans Dieter Dreher, riding his faithful 17 year old stallion, Embassy, in a time of 81’’56. The rider said he was really pleased with his partner for the past eight years he is trying hard to spare. “Dinard is only his 5th show this season; he will compete in Valence. I try to be very careful. I love him too much.”

Eight pairs out of 39 were eliminated or decided to retire, probably to focus on Sunday Rolex Grand Prix of Dinard.

Fifty three 7 year old horses were competing in the second leg of their competition supported by the Haras des M. 19 cleared the 1m35 course, but to win, the rule was also to sign the best time. The Belgian rider Gudrun Patteet associated to her mare born in Luxembourg, Crystal de Lau (E.T), managed to beat everybody in a time of 64’’94. Her fellow citizen, Grégory Wathelet, riding the Holsteiner stallion Carleyle, places immediately behind with a time of 64’’99. The 3rd place goes, with a time of 66’’79, to the French rider Pénélope Leprevost and her Selle Français mare Big Star des Forêts (Untouchable M).

On that second day of competition, the riders registered in the CSI 1* label had a double chance to shine, provided they were fast enough, since the two classes on the program were timed against the clock.

In the Institut Esthederm class, over a 1m15 course, the French Jade Pichard clinches victory, associated to Vegas Flamingo, in a time of 73’’44, but her fellow citizen Noémie de Baumais stands right on her heels with Ardoise de Gruilly in 73’’66. The third step of the podium is occupied by the Swiss Clara Best who clears the course with Bella de Preuilly Z in 77’’23. The Top 10 of this class is exclusively feminine.

In the Le Sabotier class, conducted right after the previous class over a 10cm higher course, Chloé de Ponnat has the Marseillaise played in the stadium after riding one of the 17 clear rounds of the class in a time of 68’’7 associated to Time Out (NL). With almost two more seconds (70’’65), her main opponent for the day, Axelle Moro, riding Asse du Beaumenil, clinches 2nd position, and places in front of the Mexican Patricio Pasquel Poo associated to Arcange de l’Arc, who crosses the finish line in 71’’57.

The third day of this 2018 International Jumping of Dinard will start with the Royal Emeraude class, over 1m35. The Institut Esthederm Grand Prix, support of the 1m15 final with a jump-off, will follow, and the last competition of the day in this category, over 1m25, will be held in the Grand Hôtel Barrière Grand Prix. The riders will give their very best to shine, since the winner will be generously rewarded.