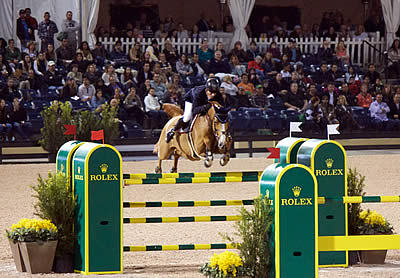 Wellington, FL (December 6, 2016) — Todd Minikus commanded the attention of audiences this past week in the Holiday & Horses show series, held November 30 through December 4, at the Palm Beach International Equestrian Center in Wellington, Florida. Minikus, who was named to the Short List for the 2016 U.S. Olympic Show Jumping squad, highlighted the week with a top three placing on Babalou 41, owned by Two Swans Farm, in the $216,000 CSI 4* sponsored by the Palm Beach County Sports Commission. Minikus didn’t stop there, placing at the top of his classes aboard a varied group of horses throughout the week.

In addition to competing with the seasoned Babalou 41, Minikus competed Vita 24 and I Am Nala, both also owned by Two Swans Farm. Minikus also took the reins on several new rides, including Coverboy, Eldorado VDL, and VDL Excel, whom are all owned by The Coverboy Group, as well as Zephyr and Valinski S, both owned by Wyndmont Inc.

Minikus piloted Zephyr to a first place finish – ahead of 50 competitors – in a 1.40m Jumper class, and also placed in the top ten in the $25,000 Omega Alpha Grand Prix. The aptly named ‘Coverboy’ took first and second places in two different 1.40m classes. Eldorado VDL also showed his promise by placing third in a 1.35m class. Minikus commented, “I was really pleased with my horses’ performances in the show ring, and I’m really looking forward to taking these horses to their next level this season.”

The Winter Equestrian Festival at the Palm Beach International Equestrian Center begins on January 11, 2017, and is the largest and longest-running hunter/jumper show circuit in the world. Last year, Minikus started his winter competition season with back-to-back victories in consecutive Saturday Night Lights Grand Prixs. Aboard Quality Girl, owned by the Quality Group, Minikus won the opening $86,000 Marshall and Sterling CSI 2* and then won the $130,000 Adequan CSI 3* with Babalou 41.

Minikus keeps his Grand Prix horses at the top of their game with the support of his generous sponsors. Most recently, sponsor Schneiders Tack restocked Team Minikus on all essential barn supplies and products to keep his horses’ coats gleaming and competition ready. When not competing nationally and internationally, Todd Minikus offers sales and training services just minutes from Wellington, Florida’s Winter Equestrian Festival show grounds. Follow the action from Team Minikus on Facebook and Instagram @Todd_Minikus, or visit www.ToddMinikusShowJumping.com.