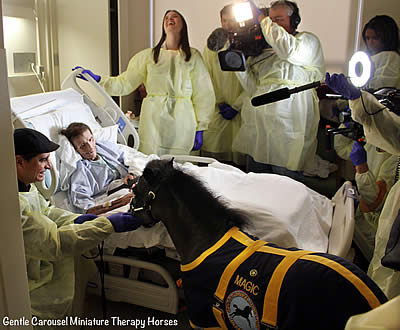 Therapy horse Magic of Gentle Carousel Miniature Therapy Horses received the 2016 Pet Hero of the Year award in Tampa, FL and became a member of the FVMA Pet Hall of Fame.

Magic also received an American Red Cross Hero Among Us Outstanding Service Award in Nashville, TN in 2016 and is featured in the newly released The Book of Heroes by National Geographic.

The tiny horse has helped survivors, medical professionals and first responders of the mass shootings at Sandy Hook Elementary School in Newtown, CT, the Emanuel African Methodist Episcopal Church in Charleston, SC, and the Pulse nightclub in Orlando, FL. She has also worked with the tornado survivors of Moore, OK, child trafficking victims in Washington, D.C., and in children’s and veterans hospitals across the country.

Gentle Carousel Miniature Therapy Horses, an all-volunteer 501(c)(3) charity, works with over 25,000 adults and children each year inside hospitals, hospice programs and with families who have experienced traumatic events.

Some of Magic’s other honors include:

One of History’s 10 Most Courageous Animals – TIME Magazine
Most Heroic Pet in America – AARP
A Reader’s Digest/Americantowns Power of One Hero
One of the 10 Most Heroic Animals of 2010 – The Daily Beast
E. T. York Distinguished Service Award
One of Seven Most Notable Animal Heroes in the World – The Daily Mirror
Magic is a Deputy with the Alachua County Sheriff’s Office.
United States Equestrian Federation/Equus Foundation Horse Stars Hall of Fame – 2015