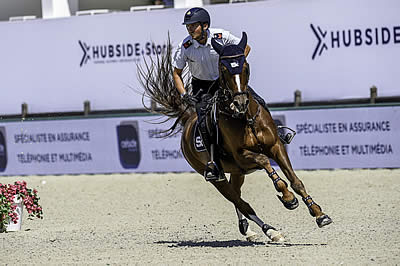 The small Grand Prix at 1.45m has taken place on the track of the HUBSIDE JUMPING. Among the thirty-one champions at the start, ten took part in the jump-off. Signing the fastest double without fail, the Italian Lorenzo de Luca and Amarit d’Amour (41 “22) won ahead of the Dutch couple Maikel van der Vleuten and Edinburgh (41” 63). Irishman Denis Lynch completes the podium with Cristello (42 “26). The best French performance goes to the couple Olympic champion by reigning teams, Philippe Rozier and Rahotep from Tuscany (47” 70).

“I’ve been riding Amarit d’Amour for a year now. Half of him is owned by Stephan Conter and the other half by Katharina Offel: I’m very lucky to be able to ride him. Today is his first victory in 5*; he didn’t run much in his career. He jumped very well in the first two weeks: in the two 150 jump tests, he was flawless on the first lap; in the jump in the first week, I didn’t look for speed; the second week I tried to go faster and I knocked over a bar. Today I said to myself, ‘OK, I give everything.” He has remained very focused with me. We can see that the plateau has been very high here since the start of the competition and each jump-off runs very quickly. And this jump-off was no exception to the rule – all the more happy that Amarit d’Amour is a particular horse: he is very sensitive, he can be impressed, but he has incredible qualities. In tomorrow’s 5* Grand Prix, I’ll take out Catwalk Harry. It will be his first 5* Grand Prix. I’ve been riding him for about six months. He jumped the 4 * Grand Prix very well last week, so I’m optimistic. Whatever the outcome, it will take experience. After confinement, we see that the horses, all the horses, are in great shape. For my part, I took the time to really accompany each of my horses during this period. Of course, the work was less intense than usual, but probably more intense, which we do not always have time to do when we are every week in competition. We took the time to discover each one in depth.”

Reactions from all the winners here.