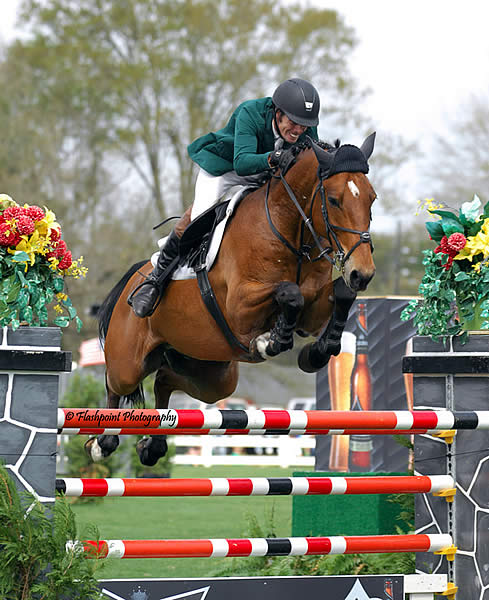 March 19, 2013 – Gulfport, Mississippi – The setting sun dipped into the Gulf of Mexico and extended its rays to the Harrison County Fairgrounds and Equestrian Center, bidding it a final farewell to the 2013 show season.

The best was saved for last, as more than three thousand spectators came out to watch the $50,000 Budweiser Grand Prix on March 10 and savor the last bit of the 2013 Gulf Coast Winter Classic Circuit.  Politicians, sponsors, trainers, riders and equine enthusiasts of all ages sat ringside and after the prix, all took to walking the course after the class.

Official Equestrian Lifestyle Magazine of the Gulf Coast Classic Company, Sidelines Magazine, ran a special contest whereby the contestants had to submit a photo of them and their horse on the “sidelines” in order to win a chance to walk the $50,000 Budweiser Grand Prix course with Wilhelm Genn.  The contest was a huge success and more than one hundred photos were submitted.  Lucky winner Jill Zednick of Biloxi, Mississippi won the contest and had the opportunity to hear from the German-born grand prix rider, Wilhelm Genn, on how to tackle the course.  Obviously his advice worked, since his son and professional rider, Theo Genn, won the class aboard Bridlebourne Stables LLC’s Winchester.

The dedication and commitment by the riders paid off when they received their Gulf Coast Classic Circuit Awards.  Proud recipients included:

For the first time in its fifteen year history, the Sportsmanship Award was presented to local resident, Ann Stewart, for her pro-Gulf Coast Classic Company efforts.  “Ann became a friend of the horse show in its first year in 1999 and has since worked tirelessly to promote and improve the show and its home at the Harrison County Fairgrounds and Equestrian Center,” said Janet McCarroll, Gulf Coast Classic Show Coordinator. When presenting Ann with the beautiful needlepoint pillow and Sportsmanship Trophy, McCarroll said, “Ann has gone from being a cheerleader at Long Beach High School years ago to being the Gulf Coast Winter Classic’s best cheerleader and most supportive friend.”

Thousands of riders traveled from all corners of the United States and made Gulfport their home for five weeks.  Health issues plagued the circuits in Florida, but the Gulf Coast Winter Classic was thankfully untouched by the virus that shut the gates to so many shows in the south.  “By working with the state veterinarians and employing their recommended bio-security measures, we were able to escape the virus that infected horses at other horse shows.  We did not allow daily ship-ins and moved those horses on-site at no charge to them.  We were considerate of our exhibitors and I know in the end, we are all relieved we escaped this without incident,” commented Classic Company President, Bob Bell.

The circuit was certainly a special one for so many this year.  The USHJA Horse of the Year, Gramercy Park, owned by Lynn Smith and ridden by Thomas Brennan of Charles Town, West Virginia, made the Gulf Coast hunter rings his home over the last five weeks.  Thomas Brennan said, “One of the things I love about Gulfport is that you can bring a horse here and by the time you go home, you know what you’ve got and you know what they can do and you’re ready for the year.”  “The judges here are top notch – this is a horseman’s venue – with all of the other choices, there are places to graze them, you can ride them in a different ring every day, there’s plenty of space, they don’t get sour, there is no congestion and plenty of turnouts,” he added.

It is no secret that the Gulf Coast Classic Company and its sponsors throw complimentary parties that are considered to be the best in the industry.  Every Friday night there was always something going on and many Mondays, local casinos rolled out the red carpet to equestrians looking to let their hair down for the evening!

The grounds were spectacular this year and the reviews from international Olympic course designer Steve Stephens to grand prix riders to hunter riders resounded with accolades.  “This field is one of the best in North America,” said Stephens. “It’s really what sets this show series apart from the others,” he added.  “Horses gain a certain energy from the grass,” said exhibitor Rodney Bross. “Many other shows try to replicate that with synthetic footing, but to have a field this nice and all natural is what all other shows are trying to accomplish with their synthetic footing. But, you can’t replicate nature,” he added.  The hunter rings collected their share of praise too.  According to Thomas Brennan, trainer and rider of the USHJA Hunter Horse of the Year, Gramercy Park, “The footing is predictable.  You know that whatever the weather, Allan [Rheinheimer] will handle it – they are smart about it and good at it.  You feel safe at 2’6 to 4′.”

Many sponsors of the Gulf Coast Classic traveled to Gulfport this year and found the equestrians competing at the shows to be quite receptive to their message, product and brand.  “We had a great time and are looking forward to the rest of the Classic shows,” said Caroline Hogan of Luitpold Pharmaceuticals.  “Our time in Gulfport was great,” said Hillary Fanning of Merial.  “We had a good turn out and are looking forward to the Atlanta shows,” she added.  “Our trip was very productive and the introductions were great,” said Tamara Otus of Equestrian Connect. “Not only did I get what I wanted in our sponsorship agreement,” said Bertrand Pelletier, CWD, “I got more.”

This Bud’s for You!

After four weeks of seconds, the $50,000 Budweiser Grand Prix of Gulfport awarded Theo Genn and Bridlebourne’s Winchester the win.  “The whole circuit was fantastic; the people are awesome – from the exhibitors to the sponsors, to the show management.  The field is great and our horses did well… we’ll definitely be back next year.”

The Gulf Coast Winter Classic in Gulfport is where the fun was all winter and hopefully, you didn’t miss it! Mardi Gras’ festive atmosphere in neighboring New Orleans spills onto the show grounds, making this winter circuit the most fun in country. With its close proximity to the Gulf Coast beaches, class offerings, prize money, and social scene, the Gulf Coast Classic Company’s Gulfport shows are a must on everyone’s show list.  The show featured weekly $2,500 USHJA National Hunter Derbies, the $10,000 USHJA International Hunter Derby, weekly grand prix schedule and generous Open Welcome Jumper classes.