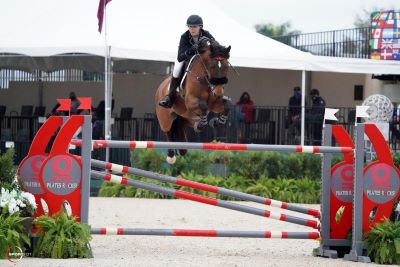 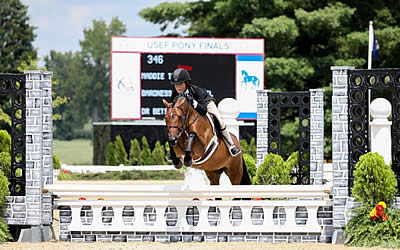 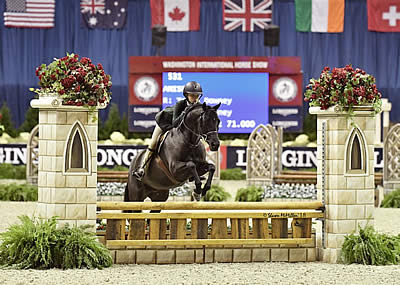 Downey, 13, and the 12-year-old black Welsh Pony Cross mare topped two of the Medium Pony Hunter over fences classes and finished second in the handy to earn the Medium Pony Hunter Championship, for which they were presented the Shenandoah Sundowner Perpetual Trophy, donated by Evan Coluccio and Ashmont Farms, Lt.

The pair’s consistent rounds proved to be enough to then clinch the Miles River Moonglow Perpetual Trophy, donated by Scott Novick & Rustic Woods, as the Grand Pony Hunter Champions. Downey and Anisette also received the Potomac Trophy for the High Score Junior Hunter Rider on a Pony, and Downey was named the Best Child Rider on a Pony, sponsored by Gotham North. For the Best Child Rider award, Downey received the Captain V.S. Littauer Perpetual Trophy.

“I grew up watching Maddie Schaefer and everyone who is now in the big eq win this trophy, and I’m just super excited. We came here just with our goal being to jog in every class. That was our goal at Harrisburg too; we just wanted to be consistent. Then we go and this happens, and we’re over the moon!” – Tessa Downey

Downey started riding Anisette this past year, after purchasing the mare from the Hoch family, and she has seen great success with her since, including winning the Medium Pony Hunter Championship at the U.S. Equestrian Federation (USEF) Pony Finals in August.

Samantha Takacs of Oldwick, NJ scored an 88 in the WIHS Pony Equitation Finals to take home top honors riding Storyteller. The win was a redeeming effort for Takacs after going off course from the first in the order in the very same class during the 2017 WIHS.

“Last year was my first time at WIHS and this year I was really hoping I did the course correctly. I was a little bit nervous because I hadn’t shown in the hunters at this show this year because I didn’t have a horse to ride so today was my first trip.” – Samantha Takacs

Thirteen-year-old Takacs borrowed the ride on Storyteller, owned by Temple Equestrian, LLC and leaded by Caroline Signorino. Despite qualifying for the WIHS Pony Equitation Finals, Takacs didn’t have a mount available to compete and jumped her first fence with Storyteller the morning of the final.

“I am so thankful that my friend Caroline and Temple Equestrian were both kind enough to let me borrow him,” said Takacs of the 15-year-old German Sport Pony gelding. “I rode him this morning and I felt like he was such a good boy and we were a good match. Then in the schooling area, I got a little self-conscious and wasn’t sure how it was going to. But, once I got in the ring I knew he would do it for me.”

After the jumping phase of the WIHS Pony Equitation Finals, the top ten riders were tested on the flat. Takacs pocketed the top score to best second-place finisher Kat Fuqua, who finished one point off the lead with an 87. 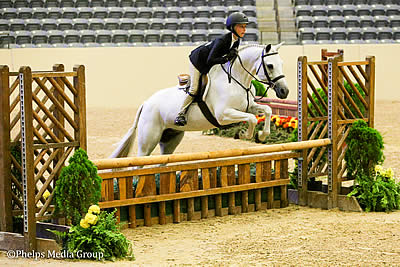 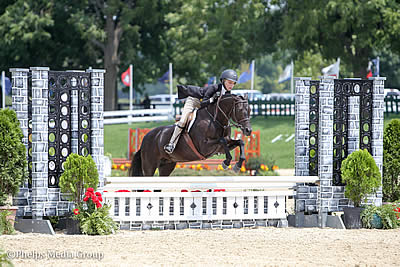