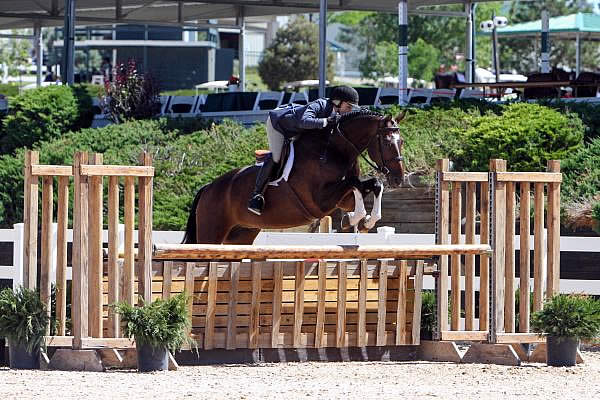 Parker, CO – July 21, 2013 – Sherri Kahn and Walter scored a personal best of 88 in their second round over fences to seize the win and ultimately the championship in the 3’6″ Amateur Owner Hunters on the final day of Summer in the Rockies. After wins over fences and in the handy on Friday, Kahn and Walter were the clear choice to top the division, though they faced stiff competition from other high-scoring pairs.

Fred Kahn, Sherri’s husband and trainer, was thrilled with Walter’s performance over the Skip Bailey-designed courses.

“I couldn’t be more happy with him or Sherri,” he said. “The second round, where he got his 88, was spectacular. The first round was really good too. In the classic, he was a little tired and had a little rub, but he tried hard. And she’s champion, so I’m happy! It’s a great way to end the circuit.”

“We had a great couple of days,” Sherri said. “He’s a very good boy. He rode really well and was jumping really well. He must like it here.”

The pair was stepping up in height from the 3’3″ Performance Working Hunters after claiming the championship in that division at Summer in the Rockies V.

Kelsey Thatcher and Pony Lane Farm’s Starina B collected wins over fences and in the hack to take the reserve championship. Starina B was a bit exuberant on Saturday, but settled in on Sunday and showed off her eye-catching style over fences. Thatcher and Starina B also took third place in the $1,000 Amateur Owner Hunter Classic.

“She was great,” Thatcher said. “She was a little wild yesterday, but she came out today and was absolutely fabulous.”

According to Thatcher, Starina B’s sensitivity and awareness of the rider make her a challenging but rewarding ride. “You have to be constantly paying attention to her because she’s constantly telling you signals,” Thatcher explained. “She’ll listen to even the slightest degree of body control.”

In the 3’3″ Amateur Owner Hunters, Nicole Stern and Calabria scored two wins and the championship ribbon. Calabria just moved up from the Pre-Green Hunters and is also competing in the 3’3″ Performance Working Hunters with trainer Michael Dennehy.

“She’s very easygoing and very eager to please,” Stern said of Calabria. “She wants to be as good as she possibly can. We’re just trying to work out some kinks between us and make sure that we’re a cohesive unit. She aims to please, so it’s just working on getting her to the point where she understands what to do to please. She has a great mind and is definitely learning.”

“We come to the Colorado Horse Park often – it’s a great place to show,” Stern, who is based at nearby Columbine Equestrian Center, said. “They’re really building the courses beautifully, and I think it’s helping the horses jump really well. So I’ve been very, very pleased with the overall experience.”

Elizabeth Hund and Timbuktu wound up with a total of two wins to take home the reserve championship in the 3’3″ Amateur Owner Hunters. Hund bought Timbuktu from Sharon Kvistad, who rescued the off-the-track Thoroughbred to give him a chance at a new career.

“The way I feel about him being a rescue and having a second chance is kind of how I feel about me,” Hund said. “I rode when I was a junior and then I quit for 30 years. I couldn’t afford it, I was working too much, I got married. I started riding again 5 years ago, and this is my second chance to do a sport that I love, that I can still physically do and financially manage. I feel like he and I are getting our second chance.”

Nicole Lyvere ended Summer in the Rockies on a sweet note with a victory in the $1,000 Amateur Owner Hunter Classic aboard All In. Lyvere and All In edged out Kahn and Walter, who took second, and Thatcher and Starina B, who were close behind in third.

“He was perfect today,” Lyvere said of All In. “He just went out there and didn’t spook at anything. We were late on one lead change, but he’s an overachiever, and the second time we went in and did a change, he did it before I even asked. He has to make everything perfect.”

She felt that she benefited from showing all six weeks of Summer in the Rockies, and she saw her horses make marked improvements over that time. “I thought that they got better and better over the summer,” she said. “It kind of becomes a routine, and if you finally get a fix on one thing you had a problem with one week, you can fix it the next.”

“Nikki just continues to amaze me,” trainer Cindy Cruciotti said. “Her technique has gotten so detailed and sophisticated. She just gets on and she doesn’t need to warm up any more – she just does two rounds and feels confident and comfortable with what she’s sitting on and her technique and style. It’s really fun to watch. I’m proud of her.”

Lyvere’s win capped a successful circuit for Cruciotti’s Serenity Farm. The farm, located in Elizabeth, CO, is close enough that the horses can go home and enjoy their usual turnout routine in between competition days.

“We had a great show,” Cruciotti said. “Pat (Boyle, of Showplace Productions) did a super job. The footing was wonderful – not once were my horses sore. They loved coming in these rings. The jumps were always different – appropriate for the level of competition each week.”

“It was really nice to see my horses at the end of the six weeks jumping better than they did when they started,” she concluded.

Sunday was the final day of Summer in the Rockies at the Colorado Horse Park. The successful summer series returns in 2014. The Horse Park continues to offer events throughout the summer and fall, including dressage, eventing, and hunter/jumper competitions. View upcoming events here: http://coloradohorsepark.com/events.