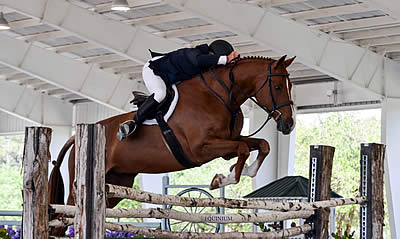 Robert Crandall and On the Slye. Photo courtesy of Equinium/The Ridge at Wellington.

Wellington, FL (March 19, 2018) – St. Patrick’s Day weekend made for an exciting final Hunter Derby Days competition at Jim Brandon Equestrian Center, which also set the stage for The Ridge Palm Beach Series Level 2 Jumpers, March 14-18. Robert Crandall, Evan Coluccio, and Samuel Perot topped the week’s highlight classes, while all levels of jumpers from Teeny Tiny to 1.30m enjoyed wide open warm ups and beautiful courses on perfect footing, as well as a bit of Irish cheer at The Ridge’s complimentary hospitality table. Beginning March 21, The Ridge at Wellington heads into its final four weeks of winter competition, with all levels of fantastic show jumping on the grass at beautiful venues like Schulyer Riley’s Wolfstone Stables and Polo West, the excitement of Child/Adult/Open classics under the lights Friday evenings, and boosted prize money and double points for the Turf Tour Finale in April.

Friday March 16 crowned Robert Crandall of Upperville, PA and Lysa Burke Hutton’s On the Slye as the epitome of hunter perfection in the $15,000 USHJA International Hunter Derby. Over a classic and beautiful course designed by Skip Bailey, Crandall capitalized on the high options, potential for turns, and the opportunity for his horse to jump with maximum scope. “We’ve had him for about 2 years,” said Crandall of the 12-year-old Selle Francais gelding. “We found him doing the Grand Prix in France with the man who bred him, and after purchasing him for Hutton we have been working towards making him a hunter. Today was his first Derby, and we decided to bring him to The Ridge because it’s the perfect place to make a show debut: a bit more low key, less pressure, and nicer for their first experience.”

Crandall’s efforts to turn On the Slye into a hunter mount seem to be paying off, and his win in the horse’s first International Hunter Derby is the evidence. “He tried very hard, and despite a few small mistakes in the first round we came into the handy and he really rose to the occasion,” said Crandall. “I have to be careful during the handy, as he can sometimes try to swap gears into jumper mode, but he did a fantastic job.”

As the International Hunter Derby concluded in Jim Brandon’s covered arena, the Rising Star Classic was just beginning to see its first few rounds. A number of fantastically athletic horses took to the course as the sun began to set, and Chilean Olympian Samuel Perot proved exceptional aboard his own Cous Cous Van Orti. The pair blazed through the jump off to a time of 47.710 seconds, beating out Perot’s own time with his other mount, Buga Z (48.693). Audrey J. Robison and Silver Lining jumped to third, on a jump-off time of 58.580 seconds. With six double clears and a number of exceptional efforts, the $5,000 1.30m Rising Star Classic, which will be held every Wednesday through April 13, serves as an ideal class for up and coming Grand Prix horses as well as riders looking to gain experience and poise over bigger jumps.

Irish cheer filled the Jim Brandon’s appropriately hunter green covered arena on March 17 for The Ridge’s $5,000 National Hunter Derby. A scaled down version of the International Derby course welcomed 22 competitors and seemed to encourage handiness and elegance with its beautiful obstacles and intricate design. Evan Coluccio of Middleburg, VA and Alexa Stiegler’s Renoir put in an exemplar first round and an exceptionally handy second round to lead the derby wire to wire. Renoir seemed to channel his name’s French charm and sophistication over the course under Coluccio’s guidance, culminating in their victorious result. Renoir shares his Westphalian breeding with Fabled, a previous and very successful mount of Coluccio’s, and Coluccio stated that Renoir reflected many of Fabled’s traits: “I feel like I know him so well and can trust him to really step up to the plate,” said Coluccio. “Every time I ride him or watch him it just seems like he’s having a party, having a great time, and it feels like we win just about every time we come out. The course today was very nice; I had another horse in the International Derby so was able to be really familiar with the course and know where Renoir would shine. We took all the high options, made a very tight turn back to the hay bale obstacle, and opted to slip between two fences to double back to another jump. It was an exciting round, I think we both really enjoyed it. Having the option to show here at Nona and George’s shows is fantastic for trainers like me, with 5 horses also going at other show grounds, a group going here, and the chance to show myself. It’s a fantastic option to bring new horses and riders and really give them a chance to train at a new venue as well as show against some great riders over some great courses.”

The crowd of spectators seemed to enjoy the handy round as well, and Renoir’s owner’s mother, Ariana Stiegler, was equally happy with the derby performance: “He [Renoir] really has all the scope in the world, and he goes so well for Evan and my daughter Alexa, who shows him in the Juniors. Having exhibitor friendly shows like this one make you feel like you’re away from it all and yet still able to develop your horses.” Renoir’s trainer, William A. Barr, echoed Coluccio and Stiegler’s sentiments: “It was an exciting handy, really gave the crowd something to see, and Nona and George do a great job of accommodating everyone and making them feel at home at their horse shows.”