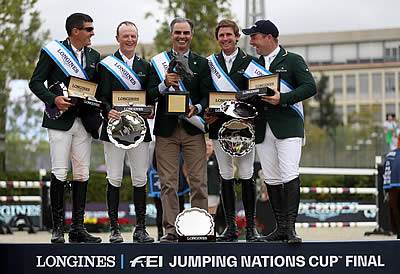 The Longines FEI Jumping Nations Cup™ Final 2019 came to thrilling climax, and it was Irish eyes that were smiling when Rodrigo Pessoa’s team of Peter Moloney, Paul O’Shea, Darragh Kenny, and Cian O’Connor clinched victory in fine style. Completing with just a single time fault, they pinned the defending champions from Belgium into runner-up spot while Sweden lined up in third. And to put the icing on the Irish cake, they also collected the Olympic qualifying spot they have been craving for a very long time.

Brilliant course-building by Spain’s Santiago Varela, who will also be presenting the tracks in Tokyo next summer, ensured another nail-biting afternoon during which it was impossible to predict the destiny of the coveted series trophy until the very last moment. But the Irish had already booked their Tokyo tickets before anchorman O’Connor went into the ring.

A single mistake from pathfinder Moloney and Chianti’s Champion at the massive triple combination three from home was followed by a superb clear from O’Shea and Skara Glen’s Machu Picchu. So when Kenny and Balou du Reventon collected just that single time fault then the road to Tokyo was already closed to their rivals from Colombia and Italy.

And then O’Connor turned a great day into an amazing one with a foot-perfect run from PSG Final because that put pressure on the Belgians for the Longines series title. The newly crowned European champions posted clears from Olivier Philippaerts (H&M Extra) and Jerome Guery (Quel Homme de Hus) and were looking good for their second victory in a row. One more clean run from anchorman Gregory Wathelet and MJT Nevados would clinch it because they could drop the unlucky four picked up by Niels Bruynseels and Jenson van’t Meulenhof at the very last fence. But, to gasps of disbelief from the crowd, Wathelet’s stallion uncharacteristically ducked out at the penultimate vertical, so Bruynseels’ four had to be counted and that would only be good enough for second place.

“We had a very clear objective coming here; the riders were super-focused and the horses were in great shape. Today we expected a very tough fight from Italy and Colombia who were our direct opponents (for Tokyo qualification), but as it happened, we were also holding strong against the big countries like Belgium and others. People sometimes don’t realise the pressure the riders are under to bring this qualification home. The weight of their country was on their shoulders; it was a big ask from them and to do it in the style they did it – hats off to them!”– Rodrigo Pessoa (Chef d’Equipe Team Ireland)

O’Connor, a member of the last Olympic team fielded by Ireland in Athens (GRE) in 2004, pointed out that the Longines title was always in their sights this week.  “Our aim was to win this trophy all along; obviously the Olympic qualification was also our goal, but you don’t come here just to qualify – we came here to win, and by doing so we got the bonus of qualification!” he said. And the team honoured one of the members of that 2004 Irish side, Kevin Babington, who finished individually fourth with the great Carling King that year and who experienced a life-changing accident four weeks ago, by wearing armbands bearing his name this week.

Pessoa was delighted with the spirit shown by his riders. “With teams there are good days and bad days… there’s a lot of chemistry, but the most important thing is that on the day it really counts, everyone sticks together and pulls the same way. People can leave their personal issues on the side and really pull for the country and that’s what happened here. I’m really proud of what they did today!”

Kenny said he realised how important his ride was. “I was a bit nervous going in the ring but I’m very lucky. I’ve an incredible horse; he’s absolutely amazing and he tried so hard. On Thursday he jumped an incredible clear and today I was just trying to make sure I left all the jumps up. Unfortunately, Santi [Santiago Varela, course designer] told me that I was the only person to get a time fault! My goal coming here was to try and do a double-clear, to try and get Ireland to Tokyo – that was the most important thing, and I’m glad I could be part of this great team. We were all fighting together; that was the most important thing,” he added.

That one time fault cost him a share of the €100,000 bonus for double-clear rounds that instead was divided between Belgium’s Olivier Philippaerts and Germany’s Daniel Deusser.

There was a great sense of satisfaction for Pessoa. “We already had two disciplines qualified (Dressage and Eventing) but it’s been a long time since Ireland, a great equestrian nation, has been at the Olympics Games in showjumping and it was this team’s responsibility to bring it home. That for me was the most stressful thing today, to feel what they felt and how hard it must have been for them to ride in those conditions. They had such a great mental attitude – nothing could have stopped them from achieving what they did. I was called in a few years ago to do a job (achieve Olympic Jumping qualification) so now it’s mission accomplished!” he said.