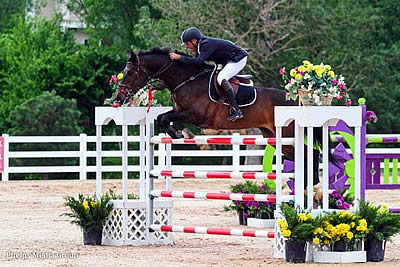 Parker, CO – June 7, 2014 – Paul Rohrbach is based just 15 minutes from the Colorado Horse Park and has claimed grand prix titles around the United States. But he hadn’t taken a grand prix victory lap in his hometown until today, when he and Wells Bridge Farm Inc.’s Camerino turned in the only double clear performance to win the $25,000 Holiday Inn of Parker Grand Prix at Summer in the Rockies I.

Helen Krieble, founder and president of the Colorado Horse Park, welcomed back competitors and spectators for the beginning of the summer show circuit. In between the first round and the jump-off, live audio from California Chrome’s bid for the record books in the Belmont Stakes was broadcast over the loudspeakers. Kenny Martin, representing longtime CHP sponsors Holiday Inn, Super 8 and Hampton Inn of Parker, was on hand for the Grand Prix.

“It was wonderful to see so many returning faces,” Krieble said. “This was a great way to start the circuit. We were very excited to have Kenny Martin here today. Those hotels have given us so much for over 10 years. We’re so grateful to him for all he has done for us, and it was a thrill to me to have him here and thank him for his support.”

Spectators were treated to an exciting class, and Rohrbach’s win didn’t come easy: course designer Mauricio Garcia crafted a challenging course in the Kathy and Brad Coors Family Grand Prix Arena that asked a variety of tough questions. Of 17 horse and rider combinations, just three advanced to the jump-off.

Following Thursday’s $15,000 Open Welcome Stake, in which Garcia set a tight time allowed in the first round, riders knew they had set a good pace to avoid time faults. They navigated a course that included a challenging triple combination and a line of two verticals set on the short side of the arena.

“I think it was a little bit different,” Garcia said. “I didn’t use the same lines that most course designers do in a ring like this. Today all the riders went forward from the beginning. The triple combination was a little bit hard for some riders, but I didn’t have a single stop in the combination, so that’s a good thing for the designer, the riders and the horses.”

Garcia cites renowned course designers Leopoldo Palacios and Guilherme Jorge as his key mentors, and Rohrbach said he saw some of Palacios’ influence in the course.

“It was the way it was set and the elements that he used,” Rohrbach explained. “Low gates, something airy and something solid, something to pull the horse’s eye down. I wouldn’t say trappy, by any means, but it would make a horse take a look and study a little bit.”

Second-place finisher John Pearce agreed that the course was a true test of horse and rider, and he relied on his trusted grand prix partner Chianto to successfully navigate the first round.

“I thought the course was very hard,” he said. “It had a lot of challenging technical elements, and I thought you had to ride very technically through it. Chianto’s heart is what makes him a good competitor – he has an unbelievable heart. He felt great out there.”

Rohrbach led off the first round with his clear effort on Camerino. Pearce and Forest View Farm’s Chianto, ninth to go, joined them in the jump-off. It looked for a while like it might be a two-horse race, but Armando Hassey and Taggert Enterprises LLC’s Eminem, last to jump in the first round, were also fault-free.

This put Rohrbach in the challenging position of being first to jump off with two tough competitors waiting in the wings. He opted for a quick but sensible pace, making efficient inside turns. He and Camerino kept all the rails in the cups, finishing smoothly over the Holiday Inn oxer and setting a time to beat of 48.129 seconds.

Pearce and Chianto blazed through the jump-off round with neat, efficient turns, but while they easily bettered Rohrbach’s time, finishing in 44.225 seconds, they pulled a rail at 12, a vertical. Armando Hassey and Eminem chose a more conservative route and took outside turns where the others had gone inside. Hassey still managed a quicker time than Rohrbach, finishing in 47.359 seconds, but he fell victim to the same vertical as Pearce and wound up in third place.

“With John Pearce and Armando, both great speed riders, my goal in the jump-off was simply to try to be double clean and reasonably efficient to put the pressure on the field,” Rohrbach said. “It put just enough pressure on, and I got a little lucky; it worked out well. The course was quite well designed for my horse with his big stride, and he just jumped great.”

“It’s been a long time since I’ve won a grand prix, and I’ve never won one here,” he added. “I’ve won in Arizona and California, placed really high in the East and won in the Midwest, but this is a first for me in 19 years.”

Rohrbach has been out of the grand prix arena for the last few years, but is back with a strong contingent of horses. Camerino is the most experienced of his string, but he also piloted Smoke Signal to sixth place with four faults and Akkato to eighth place with eight faults.

“What an entry back into it!” he exclaimed. “It was really a nice course today and we had beautiful weather. Let’s hope I can do it again next week!”

Summer in the Rockies I, the first week of the Colorado Horse Park’s six-week summer circuit, wraps up Sunday, featuring the $5,000 Show Jumping Hall of Fame High Junior/Amateur Owner Classic in the Kathy and Brad Coors Family Grand Prix Arena. Click here for full results from Saturday. Visit the Colorado Horse Park’s website and follow them on Facebook and Twitter for updates throughout Summer in the Rockies.