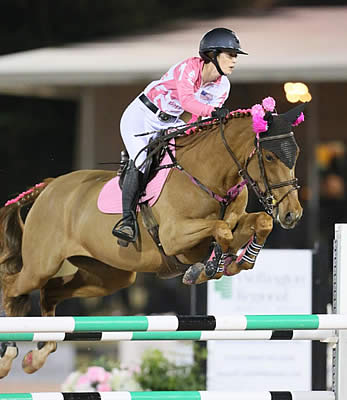 Wellington, FL – January 12, 2019 – After suffering their first loss in 10 years in 2018, the women’s team stormed back to dominate the $75,000 Battle of the Sexes presented by Wellington Regional Medical Center in 2019 by winning 29 points to the men’s team’s 11 total points. The competition ended after just five of the 10 match races completed when it was clear the men couldn’t garner enough points to take victory.

In the opening speed round, the women and men tied with five points each. The fastest speed round of the night went to Jessica Mendoza (GBR), who recorded a time of 51.258 seconds to win her round over Daniel Coyle (IRL).

The women took over in the second phase, the relay. They won all three relays, picking up 15 points to increase their total to 20 points, while the men remained on five points. While the men showed an early glimmer by winning the first two match races with David Blake (IRL) and Andrew Bourns (IRL), three subsequent victories by Carly Anthony (USA), KC Van Aarem (USA), and Sydney Shulman (USA) sealed the overall win for the women.

Out of a field of 29 entries, Adrienne Sternlicht (USA) stood at the top after a fast jump-off round in 37.178 seconds riding Just A Gamble. Eleven advanced to the jump-off over a course set by Eric Hasbrouck of the United States. Coming in second place was Mario Deslauriers (CAN) on Amsterdam 27 in 37.202 seconds, while Jonathan McCrea (USA) and Aristoteles V took third place with a time of 37.748 seconds.

This was the first week of competition for Sternlicht and her new horse, Just A Gamble, who arrived in Florida in December, and they have since spent time getting to know each other.

“[It] was really not doing too much flatwork because she’s super hot,” said Sternlicht of the 10-year-old BWP mare by Toulon x Corofino. “We’ve put her on what we call the ‘Rothchild Program,’ which is a lot of walk/trot work, a lot of trail riding, trying to get her to settle a bit. It’s almost better if she’s more unfit than fit. Even with her build and technique, she’s a powerhouse behind; she has all the scope in the world. It’s about keeping her mentally calm.”

The Small Junior Hunters 3’6 16-17 riders returned to Palm Beach International Equestrian Center on Saturday to contend for the championship title of Week 1. After two firsts, a second, and a fifth over fences along with another second under saddle, Maggie Hill of Jackson, WY took home the tricolor ribbon. Hill piloted Stella Styslinger’s O’Ryan, a 17-year-old bay Holsteiner gelding, to consistent top placings with two firsts, two seconds, and a fifth.

She and O’Ryan have been successful partners for the past two years under the careful tutelage of three-time USHJA International Hunter Derby Championship winner Liza Boyd. The pair has been successful with their junior hunter endeavors, but Hill hopes to compete the veteran hunter in several derbies throughout the rest of the season. 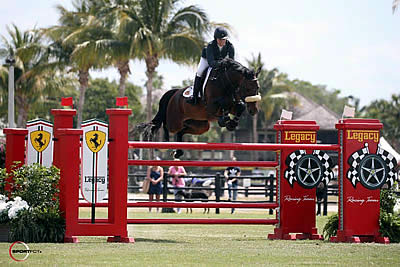