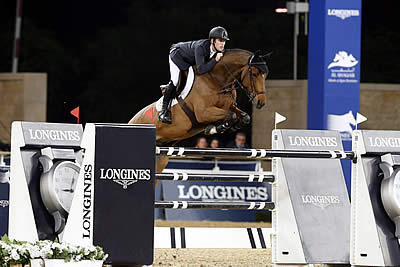 The 28-year-old from Peebles in Scotland has moved up from sixth place with 2,590 points, and is now 37 points clear of the former world number one, his compatriot Ben Maher (2,627 points).

Germany’s Ludger Beerbaum has also moved up four places into third with 2,495 points. The USA’s Beezie Madden, top-ranked female in the Longines Rankings, has dropped two places to fourth with 2,451, just one point ahead of Marcus Ehning (GER) in fifth.

Scott Brash started riding at the age of seven and competed in his first show two years later, rising quickly through the ranks to become Scottish number one. He made his international début in 2010 and was selected for the Alltech FEI World Equestrian Games in Kentucky the same year.

In December 2011, he took over the ride on Hello Sanctos, the horse he partnered to Olympic and European team gold. The latest triumph from Great Britain’s hottest Jumping prospects came at the Longines Global Champions Tour in Doha (QAT), when victory in the Grand Prix boosted Brash to the overall title – on his 28th birthday!

Longines is the FEI’s first Top Partner. Under the historic agreement, Longines is the Official Timekeeper and Official Watch of the FEI, and the partnership involves a number of major rights packages, including the Longines Rankings (the FEI World Rider Rankings for Jumping). 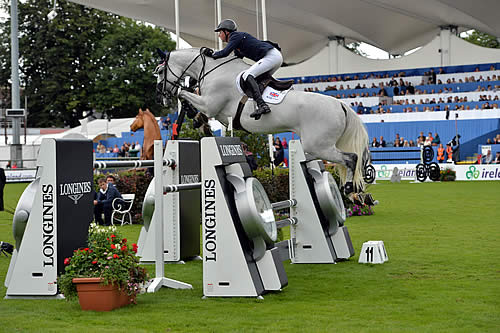 Ben Maher (GBR), pictured here with Cella at the Discover Ireland Dublin Horse Show, has jumped up to the top spot in the Longines Rankings. Photo: ES Photography.

Lausanne (SUI), 4 September 2013 – London 2012 Olympic team champion Ben Maher (GBR), who won team gold and individual silver at the P.S.I. FEI European Jumping Championships in Denmark last month, is the new world number one in the Longines Rankings, the FEI World Jumping Riders Rankings, for the first time in his career. This is a spectacular progress for the 30-year-old British rider who, with 2,510 points, has advanced from 19th place to claim the top spot.

With a 21-point lead, Maher has taken over from Christian Ahlmann, the German who has led the rankings since December 2012, and is now in fourth place on 2,410 points.

Elizabeth (Beezie) Madden of the United States, the top-ranked female rider, is the runner-up for a second month in a row on 2,489 points, ahead of Germany’s Marcus Ehning in third on 2,450.

Scott Brash, who was also on the British gold medal teams at last month’s FEI European Championships and in London 2012, joins his compatriot in the top 10, having moved up from 25th to ninth place.

Ben Maher took up Jumping at the age of eight and began competing in pony classes while he was still at school. He started training with former British rider Liz Edgar after leaving school, before spending two years with Beat Mändli in Switzerland. He won the FEI Pony European Championships two years in a row (1997 and 1998), and went on to win the FEI Young Rider European Championships in 2004.

In 2005, aged 22, he became the youngest rider to win the iconic Hickstead Derby, and in 2006 was named British Show Jumping’s Best Up and Coming Rider.

Maher made his Olympic debut in 2008 with Rolette. His second Olympic appearance was at London 2012 where, aboard the stallion Tripple X III, he secured team gold with Nick Skelton, Scott Brash and Peter Charles, the first Olympic British Jumping title in 60 years.

Ben Maher, with the 11-year-old Belgian Warmblood mare Cella and Tripple X III, has been pivotal in helping Great Britain secure its spot in the Furusiyya FEI Nations Cup Jumping Final, which takes place in Barcelona (ESP) at the end of this month.

The 38-year-old German jumped into the top spot in December 2012, and a run of successes in January has kept him out in front on 2,585 points, with a healthy 195-point lead over second-placed Steve Guerdat (SUI) who has 2,390 points. Nick Skelton (GBR) remains in third with 2,333 points.

Edwina Alexander-Tops (AUS) is still the top-ranked female and has jumped two spots to fourth with 2,298 points, while the Swiss have a second rider in the top 10, with Pius Schwizer moving up from seventh to fifth on 2,268 points.

Germany also has two riders in the top 10 of the Longines Rankings, although sixth-placed Marcus Ehning has dropped two places.