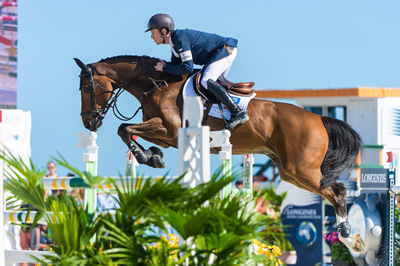 Scott Brash (GBR), pictured here at the Miami Beach 2015 CSI5* on Hello Sanctos, is back as world Jumping number one at the top of the Longines Rankings. (FEI/Amy Dragoo-arnd.nl)

Lausanne (SUI), 7 May 2015 – Scott Brash (GBR) is now back at the top of the Longines Rankings as world Jumping number one.

Brash, 29, the youngest member of the London 2012 Olympic Games gold medal winning British team, jumped into the lead of the Longines Rankings for the first time in his career in December 2013, and held on for an impressive 16 months.

Brash now has a 143-point lead on second-placed Deusser, and the reigning Olympic champion Steve Guerdat (SUI) has now been catapulted into third place from ninth in the Longines Rankings after winning the Longines FEI World Cup™ Jumping Final in Las Vegas.

Brash, from Peebles in Scotland, is no stranger to success. After his Olympic début at London 2012, he went on to win team gold and individual bronze at the ECCO FEI European Jumping Championships in 2013.

In the same year, he became the youngest athlete to win the Longines Global Champions Tour, winning it again in 2014, and is currently top of the leaderboard for this year’s series.

With the FEI European Championships in Aachen (GER) now less than 100 days away on 11-23 August, Brash will be looking to be back on the individual podium and defending the British team title.