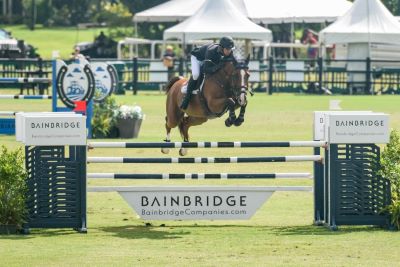 Wellington, FL – June 13, 2021 – The June portion of the ESP Summer Series came to a close with the $25,000 Bainbridge Companies Grand Prix, which saw 26 contenders take on the course designed by Héctor Loyola (PUR) on Sunday. Riding to the top of the standings as the fastest in the jump-off, Brazil’s Joao Eduardo Ferreira de Carvalho and Volt Du Thot were the big winners of the week as they claimed the largest share of the prize money. The victory was especially rewarding for Ferreira de Carvalho considering he had topped the USHJA National Hunter Derby earlier in the week, making for a weekend of wins in the hunter and jumper rings.

Ferreira de Carvalho, who claimed a victory in the $2,500 USHJA National Hunter Derby on Friday, was elated to claim the top prize in the week’s highlight jumper class, as well. “I was really happy with the results in the hunters, and I put in my mind that it would be really nice to win in the hunters and the jumpers, so it was a great day and a great weekend.”

On Friday, Hailey Royce of Wellington, FL and her own Sonic Boom dominated in the $10,000 Bainbridge Companies 1.40m Open Stake to win the class as the only double-clear pair. Going eleventh in the order, Royce and Sonic Boom mastered Loyola’s first-round track, then completed their immediate jump-off in a fault-free time of 47.63 seconds to capture the early lead. Though the rest of the pack chased them down, none were able to come close.

In the Junior/Amateur-Owner Medium Jumper Classic, presented by Equiline, Ansley Wright of Wellington, FL and Castlewood Farms’ Diamanto JT Z narrowly grabbed victory by fractions of a second. Competing over 1.30m fences, Wright and Diamanto JT Z were the speediest of four pairs that qualified for the jump-off thanks to their double-clear time of 49.03 seconds.