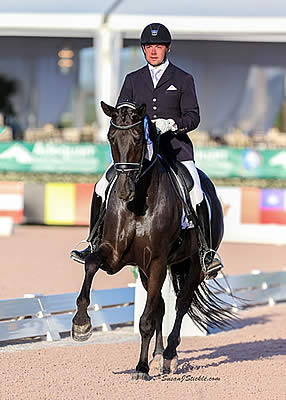 Ermelo, The Netherlands (July 12, 2016) – After proudly representing the red, white, and blue at the 2015 FEI World Breeding Championships for Young Dressage Horses in Verden, Germany, Endel Ots and his exceptional Hanoverian gelding Lucky Strike (Lord Laurie x His Highness) will now return to Europe to compete in this year’s hotly contested international championship. In Ots’ World Championship debut last year, he surpassed global expectations and was the first American to have ever qualified two horses for the competition. Ots will now return to the coveted competition held in Ermelo, The Netherlands on July 28-31.

“When I finished my first ride at Verden last year, I knew that this is what I wanted to do with my future,” Ots recounts. “I never had doubt before, but the feeling of riding in a World Championship representing my country was a feeling like no other.”

Lucky Strike is one of a rare handful of U.S. horses to have ever competed at the FEI World Breeding Dressage Championships, placing 11th in the 5-year-old Final, and, even more extraordinarily, qualifying to return the consecutive year in the next division.

“I am very excited about returning. I had such a wonderful experience last year. I did not know 100% what I was getting into, or even grasp the size of the event last year. I feel very happy with my horse and his progression, and am so humbled to have this opportunity,” Ots says.

Since returning from Verden last year, Ots has focused on strengthening Lucky Strike’s training with the expertise of a myriad of mentors. Ots credits Canadian Grand Prix rider Evi Strasser for her continued efforts and mentoring from the very beginning of Lucky Strike’s training. He has also had excellent guidance from U.S. Dressage Young Horse Coach Christine Traurig and the Developing Dressage Coach Debbie McDonald throughout the winter season. Ots and Lucky Strike also had the opportunity to ride with Canada’s Team trainer and German National Coach, Johann Hinnemann, in the Adequan USDF FEI Level Trainers Conference.

“The collaboration of all this top-level help has been invaluable to me,” Ots states. “Lucky qualified with the two highest scores he has ever received (an 87.600 and 87.200 in the FEI 6-Year-Olds Final and Preliminary tests at the Global Dressage Festival CDIO 3* by Stillpoint Farm). I know that was through the caliber of trainers I had standing behind me.”

Ots intends to work with Hinnemann again before the World Championships, and is focusing his training sessions on transitions and keeping Lucky Strike flexible. Ots is passionate about developing young horses, and thrilled with his Lucky Strike’s presence as a formidable contender in the international competition.

“I love working with young horses because they are a clean slate. They keep you humble and accountable for your actions. You can never blame a previous rider for anything. I love how excited they are to learn when you get them on your side, and the intimate relationships that form when bringing them up the levels.”

Ots operates his training business Endel Ots Dressage out of the Everglades Dressage facility in Wellington, Florida. For more information on the numerous accomplishments and latest news for Ots and Lucky Strike, visit www.endelotsdressage.com.

Lausanne (SUI), 6 August 2012 – The British-bred Woodlander Farouche and her rider Michael Eilberg (GBR) made history yesterday at the FEI World Breeding Championships for Young Dressage Horses in Verden, Germany by scoring the highest marks – 9.88% – ever recorded in the 15 years of the competition.

The Hannoverian chestnut mare, who won the five-year-old class last year, is also the only mare ever to have won the competition for both age groups, and joins the elite group of double winners that includes the stallions Florencio (WEST) and Astrix (KWPN).

The expectation for this mare was enormous. The moment she entered the arena the capacity crowd, many of whom had come especially to see her, fell totally silent. The spectators erupted with cheering and when her score, which included 10s for walk and general impression, was announced they gave her a standing ovation.