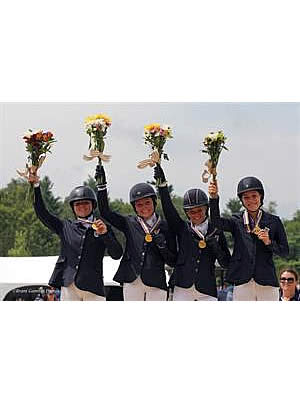 Lexington, Ky. – The Adequan/FEI North American Junior & Young Rider Championships presented by Gotham North (NAJYRC) came to a close on Sunday at the Kentucky Horse Park with the awarding of the 2015 event’s final medals. In the CH-J 1* portion of the USEA North American Junior Eventing Championship, Area II claimed Team Gold, and Area II rider Camilla Grover-Dodge rode to the Individual win. Area III’s Diane Portwood earned top honors in the CCIYR2* division. In para-dressage, riders completed the freestyle phase of competition and were presented with their Freestyle medals.

Area II led the CH-J 1* competition from the dressage phase all the way to the end of the stadium jumping phase to claim the Team Gold medal.

The team had a commanding lead heading into Sunday’s stadium jumping phase, and they knew that they could have as many as five rails amongst them and still clinch the Gold. Then, Booth and her teammates received unfortunate news. Booth’s mount, Twizzel, was withdrawn after being held for re-inspection during Sunday morning’s final horse inspection, and Booth would be unable to continue the competition.

This meant the devastating end of the journey toward an Individual medal for Booth, and for the team it now meant that Booth’s score was automatically their one to drop. The Area II riders went from having five rails in hand to only being able to afford having one to still win the Gold.

“When we all got the news, we all cried,” Decker said. “We had a moment, and then we said, ‘Okay ladies, we have to do this for Morgan. Let’s get it together and go jump some double-clear rounds.'”

And that is exactly what they did. Decker and Grover-Dodge both turned in seamless clear rounds to cement their team’s solid position, while Clement had just one rail down for four faults. As for Grover-Dodge, that final clear would guarantee her a second medal – the Individual Gold.

“I’m so excited. I was just so happy for everyone. Everyone worked so hard, so it’s just the best feeling,” Grover-Dodge said.

Clement said, “It’s so cool; I love my team. We’ve all worked so hard, and we were all so ready for this. It’s just the coolest feeling, and I’m so happy. I wouldn’t want to be with any other girls. ”

While Grover-Dodge clinched the Individual Gold medal with an impressive margin and score of 38.3, the Individual Silver was awarded to Madelynn Snoozy (15, Ridgefield, Wash.) on Udealer on a score of 45.9. Shelby Brost (17, Red Deer, Alta.) and Crimson earned a score of 46.2 to win the Bronze medal.

In the CCIYR2*, Area III’s Diane Portwood (19, Marietta, Ga.) and Cinerescent held onto their overnight lead to claim the win. Portwood finished on a total score of 68.5.

“I’m so happy with ‘Leila.’ She was fantastic all weekend,” Portwood said of Cinerescent. “I’m very happy to be here. I’m super happy with her cross-country; that’s both of our best phases. She’s a fantastic cross-country horse.”

Taking second-place honors were Nicole Doolittle (18, Reddick, Fla.) and Tops of Area III on a score of 84.5, while third place was awarded to Area VIII’s Paige Pence (16, Louisville, Ky.) and Class Action, who finished with a score of 94.

Sunday’s presentation of the Para-Dressage Individual Freestyle medals marked the end of a successful debut of Para-Dressage competition at the NAJYRC.

Kate Shoemaker (Glendale, Ariz.) on Pacifec M competed in the Grade III, earning a 71.700% for the Gold medal.

“I was really proud of Pacifec today,” Shoemaker said. “He was really tired in the warm-up, and then we got him down in the arena and said, ‘come on buddy, one last time,’ and he said, ‘you got it, girl!'”

Cambry Kaylor (Lehi, Utah) on Markgard Donnewind and Sydney Collier (Ann Arbor, Mich.) on Wentworth performed their freestyles in the Grade 1b division. Kaylor’s score of 70.750% earned her the Gold medal, and Collier earned a 66.100% to take the Silver medal.

“I’m really proud of my horse today,” Kaylor said. “We were pretty conservative the last couple days, and we really gave it our all today. I’m still on could nine.”

Representatives competing for Team Canada in the Individual Freestyle included: