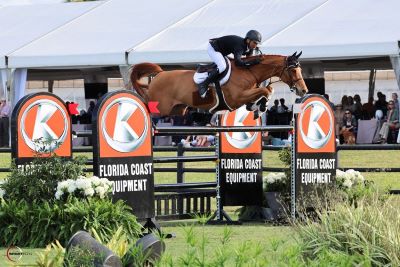 A sweeping course designed by Oscar Soberon (USA) welcomed an all-out foot race in the jump-off. The five who advanced were led off by Coyle and Ariel Grange’s Gisborne VDL, a 13-year-old Dutch Warmblood stallion. They set the pace at 40.05 seconds.

Returning immediately after, Farrington and Landon, a 10-year-old Zangersheide gelding owned by Haity McNerney, quickly took over the lead by only fractions in 39.30 seconds. In the end, Landon could not be caught.

“Landon is a big-strided horse, but Daniel’s horse is also a big-strided horse, and I thought he had an incredible round,” said Farrington. “I probably have a little quicker foot speed than him, but it took a lot to beat that round today because he was dropping strides everywhere on a huge gallop the whole way around.”

Landon’s speed across the group proved enough to take top honors, the gelding’s first grand prix win to date. “He’s very careful and a competitive horse,” said Farrington. “I have a great team coming up and he’s one of that group, so it was an exciting day for the horse and our team.”

Darquito is the former ride of Ireland’s Andrew Bourns, and Bourns was the first to congratulate the pair as they left the ring.

“There were a lot of places without numbers where you just had to get on an open gallop, and luckily my horse has a huge stride where he just eats up the ground,” detailed Schulze. “His stride is definitely an advantage in the jump-off because it’s much bigger than any other horse I’ve ever ridden, so it’s much easier to do one less stride everywhere.”