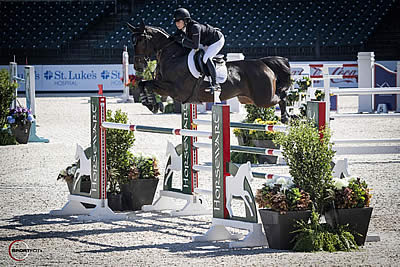 The Michel Vaillancourt (CAN) course design tested a record 106 horse-and-rider pairs, with 27 pairs qualifying for the jump-off and 16 pairs ultimately challenging the short course. Previously, the largest class hosted at TIEC to date featured 102 entries. Not only did Shulman guide the 2009 Selle Francais mare (Diamant de Semilly x Unknown) owned by Jill Shulman to a win, but she also qualified J. Boston S.E., the 2009 Belgian Warmblood (Boris van het Kluisebos x Guido) owned by Jill and Sydney Shulman, and was the only rider to return for the second round with two mounts.

Derbyshire and her own 2010 Irish Sport Horse mare (Cobra x Lux Z) were one of 50 trips to challenge the power phase of the Michel Vaillancourt (CAN) course, with 32 horse-and-rider pairs proceeding to the speed portion.