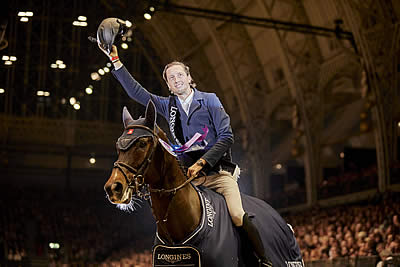 Olympic athlete Martin Fuchs (SUI) has moved to the top of the Longines Rankings for the first time in his career, overtaking compatriot Steve Guerdat who held the number one position for a year.

Martin Fuchs (27), now out in front with 3,483 points, has been hot on the heels of Guerdat since August last year and finished 2019 with a string of inspirational performances including his impressive Grand Prix victory on home turf at the CSI5* at Geneva and, a week later, taking the Longines FEI Jumping World Cup™ leg at Olympia in December, 29 years after his father Thomas won at the London venue.

“It’s fantastic, really great, but I must say that my biggest success as number one doesn’t reflect just one show or one event. It’s a combination of everything,” Martin Fuchs said. “It’s really nice after such a great year in 2019 to start 2020 as the world number one. I am so proud and so fortunate at this young age to be able to have such success already and I am looking forward to a great year ahead.”

Fuchs’ first major victory was team gold at the inaugural Youth Olympic Games in 2010, and he went on to make his senior Olympic debut at the Rio 2016 Games with his brilliant grey gelding Clooney 51.

Fuchs has achieved podium finishes at the last three major Championships, including individual silver at the FEI World Equestrian Games™ 2018 in Tryon (USA) and helping the Swiss team to fourth to earn a team quota place at the upcoming Tokyo 2020 Games.

Other important results for the Swiss athlete include victory at the 10th leg of the Longines FEI Jumping World Cup™ 2018/2019 Western European League at Basel (SUI) and at the third leg of the 2019/2020 season in Lyon, both of them with Clooney 51, while Chaplin was his Grand Prix winning co-star at the CSI5* GCT/GCL n Madrid (ESP) in May and in Cascais, Estoril (POR) the following month.

After his Olympia triumph with The Sinner, Fuchs moved up to fourth on the Longines FEI Jumping World Cup™ leaderboard to book his ticket for the 2020 Final in Las Vegas (USA) next April.

After competing in numerous international events, he won team gold at the Singapore 2010 Youth Olympic Games and, six years later, was a member of the Swiss team at the Rio 2016 Olympic Games where he was ninth in the individual standings and his team sixth.

Other remarkable moments in his career were individual silver with Clooney 51 at the FEI World Equestrian Games™ Tryon 2018 and second place at the Longines FEI World Cup™ Final 2019 in Gothenburg (SWE).