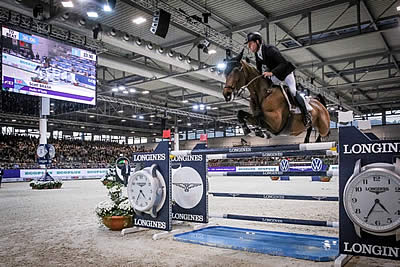 It seemed as if Ireland’s Darragh Kenny was about to provide the perfect post-competition headline for the competition staged in the “City of Love” when setting a super-fast target with the 10-year-old Romeo in the 16-horse jump-off. It was fast and furious from the outset, and when this pair galloped down the final line and stopped the clock on 36.06 seconds, there really didn’t seem to be any room for improvement on that.

But Brash, team gold medallist at the London 2012 Olympic Games, is the king of cool.

“I was fortunate enough to be at the end so I could see how fast I had to go. Darragh had done a really good round; he was very, very fast so I had to take all the risks today. M’Lady was really fantastic and I’m delighted with her!” — Scott Brash (GBR)

He described Uliano Vezzani’s first-round track as “tough and delicate,” the angled oxer at fence eight and the line from the vertical white planks at nine to the double at fence 10 claiming a significant number of victims. He said the time-allowed of 80 seconds was “maybe a bit too generous, but it showed the calibre of horse and rider here today that we got 16 clears!”

It was The Netherlands’ Marc Houtzager and Sterrehof’s Dante who were holding the lead with a time of 36.64 seconds when Kenny rode into the ring. The 31-year-old Irishman and his handsome horse were smooth and fast through all the twists and turns, and the always-vocal Verona spectators roared with approval when they scorched through the finish to reset the target at 36.06 seconds.

World No. 1, Switzerland’s Steve Guerdat, came close to that with Alamo, the horse with which he claimed his third Longines FEI Jumping World Cup™ title earlier this year, when breaking the beam in 36.19. And home hero Emanuele Gaudiano, third last to go, drove the crowd into another frenzy of excitement when just fractionally slower with the extraordinary Chalou whose toe-pointing jumping technique is quite unique.

As Brash set off with his 13-year-old mare, he looked cool, calm, and completely collected. He had worked out every inch of his run to perfection, and by the time he came racing down the long run to the last, it was clear he was out in front, the timers confirming his win when showing 35.55 seconds after he landed over the final fence to a wall of sound.

“I finished second here in Verona a couple of years ago (with Ursula) so it’s great to go one better here this time around! M’Lady is a delicate mare; she can get a little stressed with the atmosphere, so it took be a bit of time at this show just to get her relaxed in the collecting ring, but her talent showed through in the end in the jump-off today – I thought she was amazing!” — Scott Brash (GBR)

Kenny would have to settle for second while Guerdat finished third.

Guerdat, who now heads the Western European Leaderboard going into the next leg in Stuttgart, Germany next weekend, described the jump-off as “very fast!”

He said, “This last few weeks I missed most of my jump-offs so I wanted to keep my head a bit cooler today and try to not risk anything stupid, and the horse being naturally fast it was enough for the third place. But you know today if you don’t risk it all it just isn’t possible anymore to win a class like this. But I’m very pleased with the horse; he couldn’t have been any better today. I’m really looking forward to the rest of the season with him.”

Meanwhile, Brash reflected on his result and what it means for him and his brilliant mare. When asked if he might have Tokyo 2020 on his radar for her, he replied, “Yes, the Olympics is certainly on my mind and I would hope to think M’Lady is going to be one of my strongest contenders for next year.”

He is careful about how he is managing her with that in mind. “She was off for quite a while through injury a few years back, but she jumped at this summer’s European Championships to help qualify Great Britain for Tokyo,” he explained. He then dropped her down a level, jumping her at St Tropez in recent weeks before asking her to step up again in Verona. This result has confirmed for him that she’s very happy to be back at the sharp end.

“It’s nice to feel that she feels competitive at the top end of the sport again – so I’ve high hopes for next year!” he said.