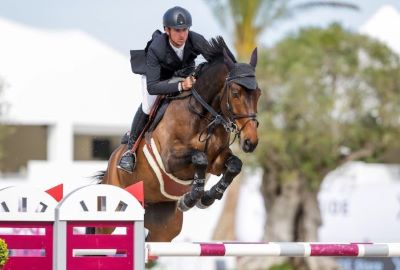 End of the HUBSIDE SPRING TOUR de Grimaud-Gulf of Saint-Tropez which brought the world’s best riders together for two weeks on the French Riviera. This week, Sadri Fegaier’s Haras des Grillons played host to the first CSI 5* outdoor show in Europe (and the only one in the world). The world hierarchy was respected since the best rider on the planet was the winner of the Grand Prix: Switzerland’s Steve Guerdat added an umpteenth victory to his exceptional list of wins, five weeks after his greatest achievement: the birth of his daughter.

“It’s my first win since I became a dad, so it obviously means a lot to me. I imagine that my daughter had absolutely no idea what happened (smiles), but it pleases me to think that I won this 5* Grand Prix for her on the day that she is five weeks old. We realised that Eduardo Alvarez Aznar, who was the first to go in the jump-off, had ridden a lot faster than we imagined when we watched his round on the screen. I don’t think my jump-off course walk was the greatest as there were strides to take out all over the place: this is why we were caught off guard by the jump-off and Eduardo’s time. I tried to take out strides, but I didn’t succeed (smiles), so I stepped on the gas going into the double. So my jump-off may not have seemed very smooth. At any rate, I’m really pleased; my horse jumped superbly. I wasn’t sure that it would be enough for the jump-off, but it worked out well in the end. We may have benefited from Julien Epaillard’s four faults. None of my horses competed a lot last year. This one took part in two or three shows in 2020; he started competing again in Spain this year, in small classes and a 3* Grand Prix, then everything came to a standstill again in terms of European show jumping. So it’s obviously his first show since competition resumed; he has a great mindset and he’s in really good shape. He was a bit fresh on the first day and I was concerned that wouldn’t be enough for today, but he gave it his all and he was in exceptional form.”