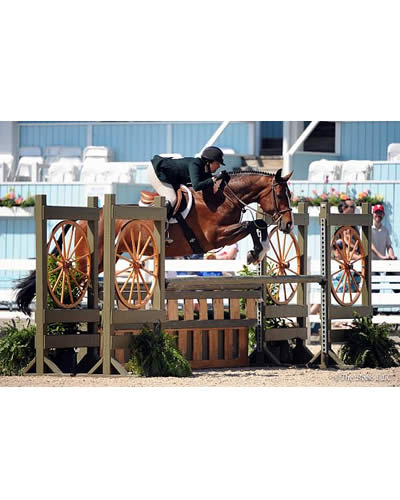 Before competing in the First Year Green Hunters, Ellen Toon and Amanda Steege joked that Steege, Havens Schatt and Liza Boyd should all take a turn in the Devon Horse Show’s Dixon Oval aboard Mirror Image.

It was in fact only Steege who rode Mirror Image, or “Mimi,” to Devon’s First Year Green Hunter Championship on Tuesday morning, but had the three professionals made the unusual decision to each ride, it would not have been the first time they had all competed aboard the 8-year-old Oldenburg mare. Steege, Schatt and Boyd took turns competing Mirror Image throughout the Winter Equestrian Festival (WEF).

“I started showing Mimi for [the Toons] last spring and showed her all last year in the 3’3″ Pre-Greens,” Steege explained. “Then we had sort of a weird situation with Florida because Mimi goes to Wellington, and I go to Ocala.”

Steege showed Mirror Image at the beginning of the winter season, and she then turned to good friends Schatt and Boyd for assistance in bringing the mare along throughout the circuit.

“Havens [Schatt] and Liza [Boyd] both rode her for us during the circuit, which was amazing. I kept saying all winter that I hope Mimi’s champion at Devon so we can do an interview about what an awesome experience it was to have those two girls step in and help me!” Steege said. “Everybody was just so nice through that whole process.”

Steege continued, “Each girl, when they would show her in Wellington, they would text me at the end of every class and let me know how it went. They were super supportive. When we started Wellington, she was a little nervous the first couple weeks. Then those girls did her for a few weeks. I came back and did her in WEF 12. Ellen had also been showing her really successfully in the 3’6″ Amateurs. She was like a different horse when I came back WEF 12, so I couldn’t wait to text those girls and tell them how much it helped me and her. That was just the most awesome experience ever. I can’t imagine doing that with two other riders and having it go as smoothly.”

Jimmy and Ellen Toon initially found Mirror Image in Europe and were struck by her striking resemblance to Ellen Toon’s extremely successful amateur-owner hunter mount, Invincible or “Shaq,” and hence the name, Mirror Image was born.

“When we were in Europe and we were looking for a horse, we both kept saying ‘she looks so much like Shaq,'” Ellen said. “She’s so Shaq-ish we would say. If they’re right next to each other they don’t, but we do confuse them a lot.”

Jimmy and Ellen Toon imported Mirror Image to their JT Farm, where Jimmy Toon handles her training, meeting Steege on the road at horse shows.

“Jimmy’s amazing. He can just take a horse that’s a good horse and make it a great horse,” Ellen Toon said.

Steege added, “I think it really says a lot about Mimi that all of us got tricolors on her in Wellington: Ellen, Havens, Liza and me. I just don’t think that there are that many First Year horses that can do that. I think it also shows what a good job Jimmy does to make her so trained and nice to ride that four different girls could ride her in a 12 week period and all end up with tricolors.”

Taking the reserve championship in the First Year Green Hunters were John French and Sochi, owned by Lee Kellogg Sadrian.

The rest of the day’s hunter divisions belonged to Scott Stewart. Stewart claimed the championship in the Green Conformation Hunters with Stephanie Danhakl’s First Light, and he followed it up with the Second Year Green Hunter championship aboard Ashcroft, owned by Gina Day.

Before jumping to two Devon blue ribbons and earning scores of 90, 89, 89 and 86 in the Dixon Oval with Stewart, Ashcroft was competing in the 5-Year-Old Jumpers with Canadian rider Ben Asselin.

Stewart and Ken Berkley tried him, and, with their positive endorsement, Day bought him sight unseen.

“I trusted their judgment. I’ve been riding with these guys for a long time; they know my ride,” Day said. “[Ashcroft’s] mind is amazing. He’s 6 years old. He’s a baby, and he doesn’t get frazzled. He’s great. His head is really good. You can’t buy a mind. That’s hard to find.”

Ashcroft is not the first Devon winner Day has had with Stewart and Berkley at Rivers Edge Farm. She also owned the 2010 Devon Grand Hunter Champion, Premier, ridden to the win by Berkley.

“Premier is totally perfect for me, and I think Ashcroft is the same,” Day said. “You wouldn’t know he’s a stallion; he’s so mellow.”

Like Ashcroft, Danhakl’s First Light is just a 6-year-old stallion that is already coming well into his own in the show ring. He came into the day on Tuesday with three wins already in the Green Conformation Hunters, and he added another over fences victory to his win list before riding away with the division championship.

The professional hunters return to the Dixon Oval on Wednesday for the conclusion of the professional hunter divisions and the naming of the 2015 Devon Leading Hunter Rider and Devon Grand Champion Hunter honors. Competition resumes at 8 a.m. beginning with the Regular Conformation Hunters. For the full schedule and results, visit www.DevonHorseShow.org.