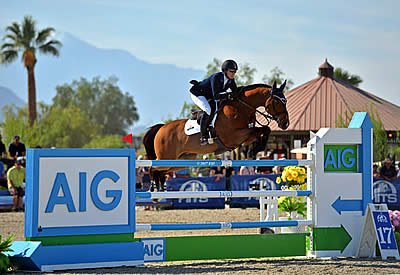 Thermal, CA (March 20, 2017): Dynamite equestrian Mandy Porter, of Encinitas, California, rose to the occasion against a top-notch field of fifty-four riders, in the most popular AIG $1 Million Grand Prix class to date. Porter rode Milano, owned by Abigail Weese, to a thrilling finish as the second-to-last rider in a six-horse jump-off. The starting order included several prior victors of the AIG $1 Million Grand Prix at HITS Desert Horse Park including 2016, 2015 and 2014 winners: McLain Ward, Charlie Jayne and Ashlee Bond.

“It’s an honor to win this class, coming into this I always hoped that this result would happen,” said Porter after her blue-ribbon victory. “I always try to go into an event like this hoping to do the best that I can – I think it’s great that the ‘West Coast’ won this one.”

New for the 2017 class was a 1.50-meter course height and the Top 20 qualified riders had the opportunity to enter two horses into the class for a second shot at the money. Of the top three, two West Coast riders walked away with the top portions of the prize purse: Porter and second place rider, Tamie Phillips, who rode Cristar, owned by Merle Gardner.

“I want to say thank you to Tom and the HITS staff – I was very pleased with the new [1.50m] course height, it gave me a lot of confidence coming into this class,” said Tamie Phillips in the post-Million press conference. “My horse was just absolutely on fire today. I put down the best round that I could, and almost hung in there, but Mandy just got it in the end. It was a really fun class. I loved it.”

Third place went to Cian O’Connor who has shown tremendous success at HITS Ocala this year in the FEI Nations Cup™ and the $100,000 City of Ocala Grand Prix. The Irish Olympian traveled west to try his luck in the desert for the first time, and his double-clear performance aboard Good Luck, owned by Adena Springs, did not disappoint.

“I’m delighted to be here; it’s my first time to be here and I have to compliment the show organizers for setting the height at a 1.50m this year to really give people a chance to jump in a class like the Million,” said O’Connor. “Everyone jumped very well, as you can see from the line-up, and I’m very happy to be a part of it and to have jumped double clear.”

Every few trips, the six riders that would eventually compete for a slice of the biggest prize purse in show jumping, would punch their ticket to the jump-off with a clear round.

A large spectator crowd filled the grandstand, complete with a sold-out VIP club and thousands viewing a livestream on HITS TV. Competitors brought the heart for their fans as the showdown for the 2017 AIG $1 Million Grand Prix title unfolded. An electric crowd looked on as the top six began their return to the Grand Prix Ring to challenge the jump-off course set by Alan Wade, of Tippery, Ireland.

“A lot of people were worried about dropping the height down to 1.50 meters, Tom [HITS President and CEO] told me there would be six in the jump-off, so I was just doing what I told,” Wade joked. “I believe a lot of riders had some unlucky faults, and sometimes the money offered can be extra pressure, but I keep that out of my mind. I build the course for the people that are here and for the sport – we are lucky to have this amount of prize money in the sport though, so hats off to AIG for supporting that. This was an exciting class and I was very happy to be here.”

“We are very thankful to AIG for their support, they’re a super sponsor – we also have just fantastic clients,” said HITS President and CEO, Tom Struzzieri. “The results, for those who organize events, couldn’t have been better. We have Cian who is a good friend and great competitor, and then my friend McLain Ward, and other riders from the East who travel out to compete with HITS here – it’s great to have that support. However, it’s no coincidence that the West Coast riders, Mandy and Tamie, are sitting up here with us. They rode with us here all winter, and did great. They came out here and had a chance to ride two in the AIG Million and that worked out beautifully; that’s what we wanted to see happen.”

First to return to contest the abbreviated course was O’Connor and Good Luck. They laid down a solid, clear trip right out of the gate, stopping the clock with all of the rails up in 43.986, a time that would hold up through the rest of the jump-off.

An unfortunate rail at A of the combination would earn them four faults as they passed the finish in 42.086, a round that would ultimately give them the fourth place prize.

Calgary, Alberta equestrian, Tamie Phillips, has been a force to be reckoned with all season at HITS Coachella. This class was no exception to Phillips’ dynamite skills, as she put down a thrilling ride to step into the temporary lead.

Phillips and her mount, Cristar, powered through the course, taking each fence by storm. The crowd cheered as they galloped home to stop the clock with a fault-free trip in 41.954.

The sun shined down on HITS Desert Horse Park and three riders still had to try their hand at the jump-off course. The anticipation was high in the stands to see if anyone could overcome Phillips’ ride or if the victor had already been crowned.

Uma O’Neill and Clockwise of Greenhill Z were next to step into the ring. Their feet touched the earth with four faults, after also having a rail at the A element of the combination, in 45.664, still good enough to eventually settle them into sixth place.

Following O’Neill were the victors, Mandy Porter aboard Milano. They knew what they had to do to move into the top place on the leaderboard. They put the pedal to the metal and took every chance they could to shave the second off of the clock.

The crowd rose to their feet as they pushed ahead to their eventual winning round. They crossed the timers in 41.600, a few fractions ahead of Phillips to the sound of cheers from the spectators. Milano and Porter also showed success during the Longines FEI World Cup™ Jumping Thermal CSI3* week with a win in the $36,400 Desert Classic win and a $25,000 FEI SmartPak Grand Prix win.

“This horse is just amazing,” Porter said of Milano. “I have a feeling this is just the beginning for him. He definitely hasn’t reached his peak and we are excited to see what the rest of his jumping career holds.”

The last rider to enter the jump-off was France’s Eric Navet, who consistently shows at HITS Coachella and stacks up the ribbons in the Grand Prix. Navet had the final shot at taking the leading round away from Porter. He rode Catypso, owned by Signe Ostby, through the course with skill until a heartbreaking rail at the final fence in the course thwarted their shot at the win. Their round in 43.391 would be good enough for the final spot in the top five.

The sun set over the mountain ridge on HITS Desert Horse Park as a West Coast victor walked away with her well-deserved slice of the Million-dollar pie.

Looking ahead, all industry eyes turn to the East Coast for the second jewel in the HITS Triple Crown of Show Jumping, the Great American $1 Million Grand Prix. Will Mandy Porter make it two in a row? Will Cian O’Connor get the luck back on his side for a Million-dollar win in the east? Will Beezie Madden return to claim her second $1 Million Grand Prix victory, or will a new winner be crowed? Only time will tell.