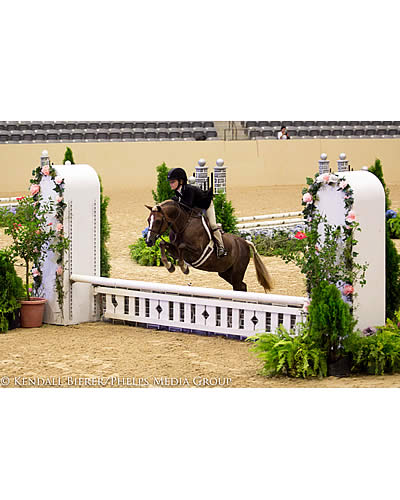 Lexington, KY – August 9, 2015 – Beginning early Sunday morning, 174 young riders and their ponies took their turns around the Alltech Arena at the Kentucky Horse Park Friday, with each hoping to claim the coveted honor of Marshall & Sterling/USEF Pony Medal Champion by day’s end. Ultimately, it was Sophie Gochman aboard Rico Suave who outshone the rest to take the top prize following two seamless over fences trips and a stand-out performance in the additional flat testing.

After the first phase course, 25 riders and their mounts returned to the limelight for one more trip around the natural track. Having whittled down the field to the top contenders, it was only fitting that the equitation course increased in both options and difficulty level. After starting with a diagonal four-stride line, the riders were already faced with an inside or outside fence option at the third effort, which then affected the long approach to the ivy-covered oxer headed towards the gate. A left-hand rollback gave way to another sharp turn in the opposite direction to a two-stride oxer-to-vertical combination, followed by a turn option to the subsequent vertical. The final fence once again presented riders with a jump option. Gochman opted for all of the reasonable inside tracks, undoubtedly showing off her equitation ability and the pony’s handiness.

“The courses were challenging, especially the long four-stride line and several of the rollbacks. The second course had a lot of rollbacks, and you had to be very careful to land on the correct lead or to get the change quickly. Luckily, Rico is very good at getting his lead changes, which made it a bit easier,” Gochman stated.

The 12-year-old from New York City may have believed the course to have its fair share of challenges, but she hid it well, conquering the tough track and consistently impressing judges Frank Madden and Ken Smith.

“What we found out in the second round is that the cream just wasn’t rising to the top, but Sophie was solid all day,” Madden commented. “When we flatted the top five, they were all within two-and-a-half points of each other, so that had a lot to do with the outcome. Sophie was leading headed into the test and stayed on top.”

“She had two of the most consistent rounds of the day, and she was quite good on the flat, so all of that combined put her at the top for us,” echoed Smith.

The young Gochman was quick to note that it was a team effort that contributed to her win, sharing thank yous by the handful just outside the ring, still dressed in the traditional champion garb with a blue sash hanging off her shoulder.

“I really, really want to thank Amanda [Derbyshire], Scott [Stewart], and Ken [Berkley] for training me, my parents for supporting me with my riding, Gustavo, Rico’s groom, and Dr. Betsee Parker. Although she doesn’t own Rico, but she has given me lots of great rides,” Gochman graciously expressed. “And of course, Rico. I gave him a kiss and made sure that he got a candy.”

Gochman had a repertoire of ponies to choose from but felt that Rico Suave, ‘Rico’ for short, was her best bet at a top placing in the Medal class. Owned by Ponies & Palms Show Stables out of Boca Raton, Florida, the small pony had been one of the 12-year-old’s trusty mounts for two years, and on Sunday, it looked like her choice paid off.

“Rico is so comfortable and brave, even when the jumps are a bit spooky. He has a good stride and a nice lead change, so I think that he was the best-qualified pony of ours. Thinking about all the challenging things in the equitation, he was the best at all of them,” Gochman said. “Plus, he is just so cute.”

Another vital member of Gochman’s support team, trainer Scott Stewart, was right by her side throughout both rounds of competition and the flatwork test, offering useful help to keep the young talent riding her best.

“In round two, it seemed that she was a little more relaxed and was able to have fun since she was so excited about making it to the top 25. I had to tell her to be calm because she was almost a little bit too excited,” Stewart laughed. “She has a naturally nice position and is always working on something. It’s exciting to watch her grow as a rider. She rides a lot and tries to get better. It was great for the week to end this way.”

Gochman plans to revel in her win a bit longer, but soon the young talent will turn her eyes to the next competition on the horizon. She hopes to qualify for the pony classes at the Washington International Horse Show during the Indoor season and eventually move on to the open equitation classes when she “gets a bit bigger.” With many more junior years ahead of her, Gochman is certainly one to keep on the radar.

The USEF Pony Finals fun came to an end on Sunday, but competition will continue this week at the Kentucky Horse Park with the Bluegrass Festival Horse Show beginning on Tuesday, August 11.

To learn more about the USEF Pony Finals, please visit www.ponyfinals.org, and to find out more about all of the Kentucky Summer Horse Shows, go to www.kentuckyhorseshows.com.