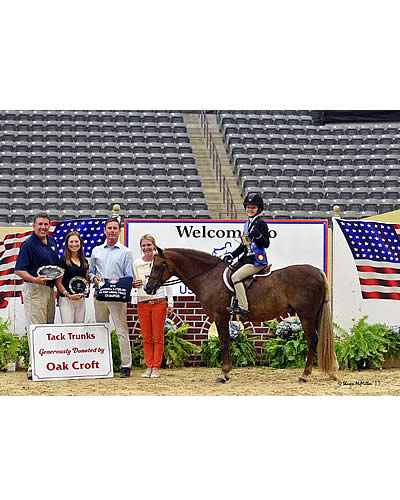 Lexington, Ky. – A week of competition at the 2015 US Pony Finals came to a close Sunday with the most coveted award of the championship. The Marshall & Sterling/US Pony Medal Finals took place in the Alltech Arena with 165 riders vying for top honors in front of judges Frank Madden and Ken Smith. After an especially beautiful first round, Sophie Gochman earned the Marshall & Sterling/US Pony Medal Finals Championship title.

In round one the riders were tested over a demanding course designed by Marc Donovan and Bobby Murphy. Twenty-five riders were called back for round two over a more difficult track to test their equitation skills. After round two, five riders, two from the Small section and three from the Medium section, returned to the ring to be tested on the flat. Gochman, Grace Debney, Jenna Drago, Ellia Giuliani, and Natalie Jayne entered the Alltech Arena to determine the top placings of the Marshall & Sterling/US Pony Medal Finals. In the test, riders were first asked to show walk, posting trot, sitting trot, and canter before reversing direction.

Twelve-year-old Gochman (New York, N.Y.) displayed her proficient equitation to be named the winner and receive the Gold medal in the 2015 Marshall & Sterling/US Pony Medal Finals.

Gochman noted that the courses were well-designed and brought out the best in her riding.

“I thought that they were challenging, especially the long four and several of the rollbacks. The second course had a lot of rollbacks, so we had to be very careful landing leads and getting lead changes. I found that a bit challenging.”

On-demand video highlights, as well as competition recaps, are available at www.usefnetwork.com.

For results and more, visit www.usefconnect.com..

Find out more information about the US Pony Finals.