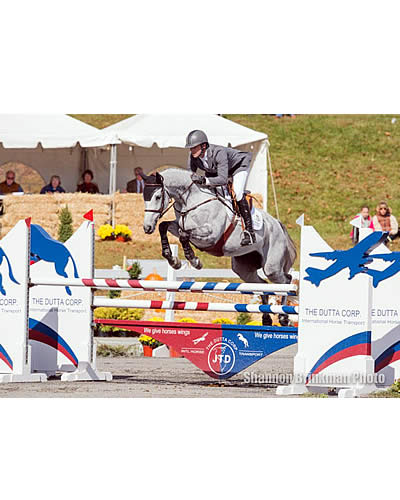 Elkton, Md. – The final day at The Dutta Corp. Fair Hill International saw National Champions crowned in both The Dutta Corp./USEF Three- and Two-Star Eventing National Championships. Taking on the Sally Ike-designed show jumping course, 56 combinations contested the final day of the CCI2*, while the CCI3* saw a field of 37. Winning her first USEF National Championship title, Tamra Smith and Mai Baum led from the start and secured the win today in the CCI3*. Also maintaining the top spot on the leaderboard throughout all three phases, Will Coleman with Tight Lines took the win the CCI2*.

Smith (Murrieta, Calif.) and Mai Baum began their weekend with a beautiful performance in dressage to score 38.5. After an impressive trip around the cross-country track, the pair added nothing to their overnight score and began the day with a rail in hand. Having won in her last three outings with the 2006 German Sport Horse gelding owned by Alexandra Ahearn, Ellen Ahearn, and Eric Markell, the pressure of the lead did not affect Smith as she executed a bold and careful show jumping round, adding two time penalties to finish on 40.5. This was Smith’s first CCI3* win and National Championship title.

“He was super. Normally, he’s pretty spooky in the ring, and today, he wasn’t at all. He went in there and was all business, I was really proud of the ride; he jumped fantastic,” said an incredibly pleased Smith. “He’s got everything – he’s the whole package. It’s an unbelievable feeling to be sitting on him; I am blown away every time I ride him.”

As the top-placed rider to have not completed a CCI4*, Smith was named the USEF National Developing Rider Champion. Smith received a horse transport flight courtesy of The Dutta Corp. as the three-star National Champion.

Phillip Dutton (West Grove, Pa.) and Mighty Nice had a solid dressage test to begin the weekend on a score of 43.5. Displaying their signature prowess on cross-country, the pair finished double-clear without a second to spare, clocking in on the optimum time of 10 minutes. The 2004 Irish Sport Horse gelding, owned by Michael Bombar, Evie Dutton, Ann Jones, Kevin Keane, and Caroline Moran, rubbed several rails, but left them all in the cups, adding two time-faults to the overnight total to earn the Reserve Champion honors.

“I probably had the luckiest round today. Show jumping has been a bit tough for us, but he left all the rails up, and I am pleased for him,” said Dutton. “He’s got a lot of improving still ahead of him, but he’s a really great horse, and I am lucky to have him.”

Finishing third was Kim Severson (Charlottesville, Va.) and The Cross Syndicate’s 2007 Irish Sport Horse gelding Cooley Cross Border. The pair added just eight-tenths of a time penalty to their dressage score in cross-country, going double-clear today to climb the leaderboard one spot and finish on 46.6.

It was an exciting conclusion to the CCI2* as less than a rail separated the top three combinations. Heading into the arena as the overnight leader, Coleman (Gordonsville, Va.) and Tight Lines finished clear and inside the time allowed to secure victory. The pair had started off their weekend with a best-ever performance in the dressage phase, scoring 42.5. The 2007 French Thoroughbred gelding, owned by The Conair Syndicate, built confidence all the way around the cross-country track on Saturday, going double-clear in impressive fashion.

“It probably wasn’t the smoothest round I’ve ever had on him, but he left all [the rails] up and tried really hard,” said Coleman of his show jumping performance. “Anytime you win a three-day event it’s a big deal, especially at the two-star level and above, and this particular one has eluded me for a number of years; personally it’s an accomplishment.”

Taking another Reserve Champion title today was Dutton and Z, adding a double-clear show jumping round to their double-clear cross-country performance to finish on their dressage score of 45.3. The 2008 Zangersheide gelding, owned by Suzanne Lacy, Jacqueline B. Mars, Simon Roosevelt, and Thomas Tierney, showcased his potential to excel in his first CCI2* contest.

“The best thing I learned [about this horse] is that he has great endurance, which you never quite know until you get to an eight minute course or more, and I’d only done horse trials on him until now,” explained Dutton of the education gained from the weekend’s experience. “I knew he was a smart on the flat, a great jumper, and a good galloper, but he just hadn’t been tested on a longer course. I’ve got confidence now that he’s going to have enough endurance for the next couple of levels, hopefully.”

Climbing the leaderboard from eighth after dressage and fifth after cross-country, Matt Flynn (Reddick, Fla.) put in a brilliant double-clear show jumping round to take third place overall on a score of 48.8 with Flynn Sport Horses LLC’s Get Lucky, a 2008 KWPN gelding. Get Lucky was Reserve Champion in the USEF Two-Star Young Horse Eventing National Championship.