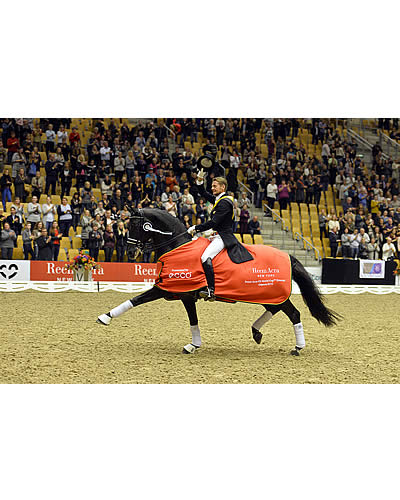 The Netherlands’ Edward Gal won the first leg of the Reem Acra FEI World Cup™ Dressage Western European League at Odense in Denmark for the second year in a row today, topping the line-up with Glock’s Voice in the 2015/2016 season-opener. (FEI/Sanne Kolind)

Odense (DEN), 18 October 2015 – Dutch star, Edward Gal, made it a back-to-back double when coming out on top at the opening leg of the Reem Acra FEI World Cup™ Dressage 2015/2016 Western European League at Odense in Denmark today. Last season he rode to victory at this event with the gelding Glock’s Undercover, but this time around he triumphed with the stallion Glock’s Voice, pinning the host country’s Anna Kasprzak and Donnperignon into runner-up spot and Agnete Kirk Thinggaard and Jojo AZ into third.

It wasn’t the easiest of victories, however, as Glock’s Voice showed some tense moments during his winning test. “He felt better today, but he was still a bit nervous,” said the 45-year-old rider who includes the 2010 FEI World Cup™ Dressage title amongst his many achievements. “He felt good at the start, but he got edgy as we went along. However, it was better than the Grand Prix. It was his first indoor show, so all things considered it was a good result,” the Dutchman said this evening.

The outcome was far from certain after Kasprzak won yesterday’s Grand Prix on a mark of 73.860. Gal was a close second on 73.380 while his fellow-countryman, Hans Peter Minderhoud, lined up third with Glock’s Romanov on 73.320. Sweden’s rising star, 28-year-old Emilie Nyrerod, filled fourth spot with Miata ahead of Kirk Thinggard in fifth. Perhaps the biggest turnaround in terms of finishing spots today was that of Ireland’s Judy Reynolds, who rocketed up from 12th of the 20 starters in the Grand Prix to fill fifth place at the end of the Freestyle.

The 33-year-old German-based Irish athlete was holding the lead on her score of 74.425 at the halfway stage of the competition. Her 13-year-old brown gelding has been showing ever-improving form as the pair have climbed up to 54th in the world rankings over the past year, and this was the first major show for Vancouver K since they just missed out on Olympic qualification at the FEI European Championships in Aachen in August. Reynolds remains determined to make the cut to Rio through any other possible route, and has planned a consistent campaign of the Reem Acra series over the coming months.

She was deeply disappointed with yesterday’s Grand Prix performance, and worked hard to turn that around. “The arena is very atmospheric and I was caught unawares when he backed off going into the corners. I was much better prepared for that reaction today,” she explained after posting a mark of 74.425.

Her lead was overtaken by Nyrerod who was third into the arena after the break. The Swede has been making a significant impact this summer, earning high praise for her contribution to her country’s victory in their home leg of the FEI Nations Cup™ Dressage series at Falsterbo in July, before making another big impression at the Europeans in Aachen. Her score of 74.800 today moved her out in front until Kasprzak seriously raised the bar with a mark of 77.100. However, the Danish rider knew her result left the door open for Gal.

“It wasn’t quite our day today. He (Donnperignon) was really good yesterday, but today he didn’t have the same feeling in the warm-up. We started well, but there were a couple of misunderstandings and it made him tight, which came out in the piaffe. I need to improve my choreography, I know that,” Kasprzak said.

When Kirk Thinggaard posted 76.250 with the lovely Jojo AZ who always makes his job look like a whole lot of fun, only Gal was left to threaten Kasprzak’s advantage, and in the end the Dutchman did it despite some difficult moments during the test.

“The atmosphere in the stands got to horse, and he wasn’t as smooth as he can be. Sometimes he reacts weirdly, but you know sometimes the weird horses are the good ones!” he pointed at the post-competition press conference. “With performances like that, sometimes you win, and sometimes you lose,” he added, having clinched victory with a mark of 78.800.

The second leg of the series will take place in Lyon, France on Friday 30 October 2015. For all information on the French fixture, go to website www.equitalyon.com or contact Press Officer Daniel Koroloff, Email daniel@blizko-communications.com, Tel +33 611 021812.

The series consists of nine legs, leading to the Reem Acra 2016 Final in Gothenburg, Sweden next March.

The Ground Jury for today’s competition was: At C, Hans-Christian Matthiesen; At H, Mariette Sanders Van Gansewin; At B, Raphael Saleh; At M, Isobel Wessels: At E, Susanne Baarup.

The Netherlands’ Edward Gal won the competition for the second year in a row. In 2014 he topped the line-up with Glock’s Undercover; this time around he claimed the honours with Glock’s Voice.

The winning horse, Glock’s Voice, is a 13-year-old stallion by de Niro.

Edward Gal NED (1ST): “It was close both days in the Grand Prix and the Freestyle but with this horse (Glock’s Voice) I’m not quite there yet.”

Bo Kristoffersen, JBK Horseshows Organiser: “We had a record crowd this year with over 36,000 spectators, and the majority of those in last few days. We are really pleased with how it has gone this year.”

Edward Gal NED (1st), when asked if he will return to Odense horse show again next year after winning twice in a row: “Of course – when you win you want to come back!”