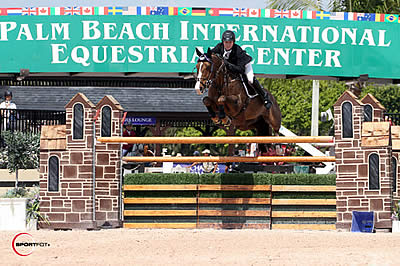 Wellington, FL – March 12, 2014 – Week 10 of the 2014 FTI Consulting Winter Equestrian Festival (FTI WEF) kicked off on Wednesday with a win for Ireland’s Shane Sweetnam with Sweet Oak and Spy Coast Farms’ Solerina in the $34,000 G&C Farm 1.45m speed class. Sweetnam has had an outstanding winter circuit so far with wins in four very competitive FEI World Ranking classes, among other top finishes.

Great Britain’s Richard Jeffery is the course designer in the International Arena at PBIEC for week 10. Jeffery set the speed track for 46 entries in Wednesday’s $34,000 G&C Farm 1.45m with 11 clear rounds. Germany’s Daniel Deusser set a fast pace in the very beginning in 66.54 seconds with Stephex Stables’ Mouse, but was eventually surpassed. Sweetnam and Solerina later cleared the track in 65.56 seconds to take over the lead. Italy’s Lorenzo de Luca and T&L NV’s Elky van het Indihof jumped into third in 67.48 seconds.

“I think it was a tricky enough course,” Sweetnam stated after his win. “There didn’t seem to be too many clear. I didn’t get to see all of the class, but from what I saw, it looked like it was hard enough to jump a clear round in the first place.”

“I saw Daniel Deusser go and he was quick, and that is a quick horse, so I knew that I had to be on it to be in contention,” Sweetnam said. “She is a very quick horse, and she stuck to the plan. I think I did one less stride to the water, and I think I did one less after the water. She was good at the triple combination. I came pretty quick to the last line and she was good to me there; I think she tried hard to leave it up. She jumped very well.”

Jeffery’s track featured a lot of set strides and tight roll back turns instead of big runs, so efficiency was key to a good round. “There were more lines and numbers and staying tight, and if you could do that right, then you could be quick enough,” Sweetnam noted. “She doesn’t spend a lot time in the air anyway, so that is a little bit of an advantage with her.”

Sweetnam has had a lot of success with Solerina and explained that she showed with fellow Irish rider Conor O’Regan before he got the ride. She had done well in some smaller grand prix classes at that point and has since stepped up to have great success with Sweetnam in the last few years.

‘Summer,’ as Solerina is known at home, is what Sweetnam calls a typical chestnut mare. The feisty redhead is not without a few quirks, but she always tries hard for her rider.

“She is a quirky mare for sure,” Sweetnam said of Solerina’s personality. “She is not the most lovable horse in the stable, but Lilly Johnson, her groom, does a great job with her. Lilly loves her, and I love her because she does her job in the ring; you’re just not going to be hanging out with her in the stable or anything.”

A $6,000 Spy Coast Farm 1.40m speed class was the first competition to be held on Wednesday morning with a win for Hannah Selleck (USA) and Descanso Farm’s Bauer. A $6,000 Spy Coast Farm 1.40m jump-off class was also held later in the day with a win for Laura Chapot (USA) and Mary Chapot’s Zealous.
Thursday’s competition in the International Arena will feature the $34,000 Ruby et Violette WEF Challenge Cup Round 10 at 12 p.m. For full results, please visit www.showgroundslive.com.