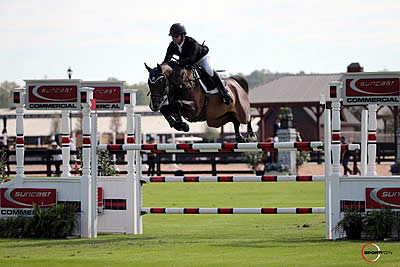 Sweetnam and Cornwall, a 2008 Holsteiner stallion (Con Air x Cambridge) owned by Siboney Ranch, bested the class of 31 entries, riding to a smooth first round on the track set by Michel Vaillancourt (CAN). The jump-off featured nine combinations and only the top three finishers completed both rounds of the class without faults.

“Michel did a great job today and I thought that it was a very nice course. It was big enough and not too technical I thought,” explained Sweetnam. “It was nice that the horses who were going to do this class had the opportunity to compete on the grass on Friday as well. The class had the right number of clears with nine and that always makes for an exciting jump-off.”

Cornwall is typically ridden by Sweetnam’s client, Kaley Tomeu, who sustained and injury and turned over the reins to her trainer while she recovers. The talented young stallion gained competition experience on both the turf and in the George H. Morris Arena this week, as Sweetnam contested the $35,000 1.45m Horseware® Ireland Opener CSI 3* and placed second, as well as the $8,000 1.40m Open Jumper Classic presented by Nutrena®.

“He’s only eight and belongs to Kaley Tomeu. She typically rides him but broke her collar bone so I’ll have the ride on him for the next few months. I’m just starting to get the hang of him now and we’re getting together a bit more,” he commented. “We’re aiming him for the last indoor competition in Kentucky. He’s very talented so I’m looking forward to seeing him progress over the next few months.”

Sweetnam finished a strong week of competition at TIEC after collecting first and second place finishes aboard Cornwall, and a top finish with second mount, Main Road, in the $130,000 Suncast® Grand Prix CSI 3* on Saturday night. Sweetnam continues to produce and compete a strong string of horses, which will play a major role in his success over the next few weeks.

“I have other horse Chaqui Z competing next week in the CSI 5*, as well as Cornwall and Main Road, who finished second in the class last night. I’ll then have to rotate the horses a bit as we’re going to go to indoors after,” commented Sweetnam. “I’m really lucky that I have such a strong string and they’re all getting mileage. Cornwall is a nice addition.”

The Grass Complex at TIEC is the newest addition to the expanding facility, allowing horse and rider combinations to experience unique competition opportunities on different footing surfaces. Sweetnam is looking forward to the potential of the complex and was pleased with the performance of Cornwall in both outings on the turf.

“Today the footing already feels like it’s opening up a bit since Friday and I think that as we continue to compete over the next few weeks it will continue to get better. The horses are all jumping well on it. I think it’s going to be a very exciting venue for competition in the future and is a great addition to this facility.”

Luis Larrazabal and Atlodetto FZ Fly through Timers to Capture $25,000 U25 Grand Prix

Luis Larrazabal of Wellington, FL and his mount Atlodetto FZ dominated the $25,000 U25 Grand Prix at Tryon International Equestrian Center (TIEC) with an incredible jump-off time of 36.934 seconds. Taylor Alexander of Castle Rock, CO and Gipsy King trailed closely behind, securing second place with a time of 36.948 seconds, while Adrienne Sternlicht of Greenwhich, CT and Helios earned third place honors with a time of 39.00 seconds.

Luis Larrazabal and Atlodetto FZ, owned by San Francisco Stables LLC, have been partners for almost two years and are building their confidence together as they gain more competition experience. The pair has been based at TIEC all summer, competing in multiple 1.30m and 1.40m classes.

Larrazabal chuckled as he described his strategy going into the jump-off track set by Michel Vaillancourt (CAN), saying, “My plan was just to go for a conservative round. Taylor Alexander had a crazy fast time and I didn’t think my horse was ready for that speed. I jumped the first oxer and was good to fence two and three, so I got excited.”

“After the double I knew I was coming close to winning,” he continued, detailing his ride. “After the liverpool, I did a short roll back, galloped down to the last oxer, and as soon as I landed I knew I had the time.”

The victory came as a bit of a shock to Larrazabal, which made the victory that much sweeter. The pair have had success moving through the levels and today was a highlight for Larrazabal, as clinching victory in a competitive U25 class is always thrilling.

“I really swear that was not my plan,” he laughed. “Of course I wanted to be clear and fast, but I was not out to beat that time. It was my lucky day for sure.”

Larrazabal and his team are looking forward to heading to the Winter Equestrian Festival (WEF), as he plans to show Atlodetto FZ in ranking classes and possibly in the Nations’ Cup representing his home nation of Venezuela.

“We’re taking it slow and step by step. He is very confident right now, so when he’s ready for the bigger classes he will show me,” he continued.

Larrazabal nearly took another win today, also jumping clear in the $25,000 Tryon Resort Grand Prix aboard Quintus Fabius. Larrazabal commented on the new Grass Complex at TIEC, stating, “Jumping on the grass is like dreaming. The footing is immaculate. I showed Friday on the grass and today as well. I actually retired one of my horses from the U25 Grand Prix after two unfortunate rails and decided to enter him in the class out on the turf and we ended up ninth. I just wanted to jump on the grass field!”

The Carolinas’ Challenge Cup Series concluded at Tryon International Equestrian Center, hosting the best of hunter competition in the region. The week featured five divisions allowing riders of all ages and experience levels the opportunity to compete for top prizes in the George H. Morris Arena.

Kara Jones of Cornelius, NC secured first and second place in the $10,000 Carolinas’ Challenge Cup Junior Hunter class, piloting her own Joyful to first place with a two round score of 160 and Cristallo, owned by Long’s Stable LLC, to second after receiving a 146. Kendall Edwards of Charlotte, NC and her own Quarterback took third place honors in the class after earning a 144 from the judging panel.

The $10,000 Carolinas’ Challenge Cup Amateur-Owner Hunter was championed by Alexandra Maracic of Syosset, NY guided her own Lucky Times to victory after accumulating a two round score of 169. Ashley Hodges of Greensboro, NC and Jet Stream K, owned by Sloan Hodges, rode to second place with a final score of 163, while Lynn Seithel of John’s Island, SC took home third place aboard her own Versace.

Courtney Canizares of Elon, NC guided her own Kiera to victory in the $10,000 Carolinas’ Challenge Cup Adult-Amateur after completing two rounds in the George H. Morris Arena to earn a total score of 167. Vicki Autry of Greensboro, NC and her own Toltec rode to second place honors after receiving a 164. Kimberly Penfold of Lake Bluff, IL and The Spy, owned by Glory Days Farm, LLC, followed closely behind with a two round score of 163.

The $10,000 Carolinas’ Challenge Cup Children’s Hunter class was topped by Catherine Sharp of Tryon, NC and her own Imperio after receiving an 80 from the judging panel in the first round and a score of 75 in the second round for a total of 155. Ann Gray Stedman of Charlotte, NC and her own Winter Romance took second place after riding to a final score of 138, while Isabel Stedman of Charlotte, NC and Arrow K collected third place honors with a 120.