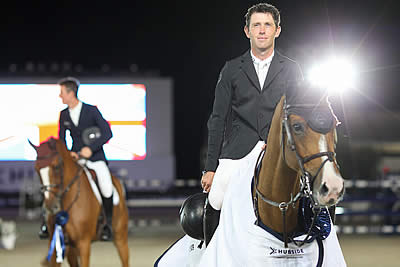 Sunday evening, Scotland’s Scott Brash, currently the tenth best rider in the world, won the HUBSIDE JUMPING de Grimaud’s CSI 4* Grand Prix for the second time with Hello Jeﬀerson, after an initial victory last October with Hello Senator. He finished ahead of France’s Edward Levy, who has been performing very well recently and Belgium’s Jos Verlooy.

“I’m delighted with Jefferson’s performance. He really is an exceptional horse. It took a while for me to be able to handle him; he is really powerful. But now we have formed a real combination and it works very well. I have been riding him for two years, but it took several months before we really became a combination. But he is brilliant, very intelligent. There were only seven jump-off riders this evening, but I really want to congratulate the course designer who did a fantastic job. He didn’t have an easy task and had to deal with an extraordinary line-up: there were virtually exclusively riders and horses that usually compete at 5* shows. So he had to create a 5*-level course; otherwise there would have been twenty clears after the first round, which is not what you want. So well done to Andrea Colombo: his courses were fair; there were rails down on all the fences. I watched the jump-off round of Edward Levy, who was first to go. His mare has a very fast stride, but it seemed shorter than Jefferson’s. So I really focused on my horse’s powerful stride to take out a stride before the final fence. It’s possible that I took out other strides elsewhere on the course as well. It’s the second 4* Grand Prix that I’ve won here at the HUBSIDE JUMPING. I would love to add next week’s CSI 5* Grand Prix to my list of wins! All of the riders agree that Sadri Fegaier has done an exceptional job as an organiser and we are all very grateful to him. Tonight’s Grand Prix which was held in the evening reminded us all of this really special atmosphere that we all love which is really great.  We all needed to experience that.”