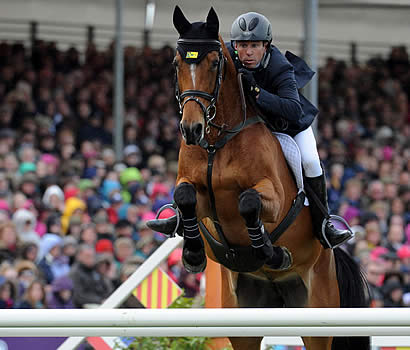 Australia’s Sam Griffiths and the Irish-bred Paulank Brockagh on their way to victory in the Mitsubishi Motors Badminton Horse Trials, fourth leg of the FEI Classics™ (Kit Houghton/FEI).

In a competition of extraordinary twists and turns, Griffiths and the Irish-bred 10-year-old rose from overnight fifth place with a well-judged four-fault Jumping round that was good enough to win due to the strong influence of Kelvin Bywater’s (GBR) course.

Griffiths’ fellow Australian, Cross Country leader Paul Tapner on Kilronan, had been left a two-rail advantage to win but even this was too close for comfort in the squally weather and he had four fences down plus time penalties to drop to fourth.

Oliver Townend (GBR) hit two rails on the 15-year-old Armada yet moved up two places to take the runner-up spot and Harry Meade (GBR) rose from eighth to a career best of third place with an elegant four-fault round on Wild Lone.

“I had thought that if I did well I could move up, but there were still good riders in front of me and I had no expectations of being on the podium,” said Griffiths, who was well down the field in 25th place after the Dressage.

“I think horses were probably quite tired after the Cross Country and the course was twisty and up-to-height on fairly dead ground, but ‘Brocks’ is one tough nut. She has a massive heart.”

Griffiths added: “This is the ultimate dream. As a little boy in Australia, I used to wait for the video tapes of Badminton to arrive, so to ride here was always a major ambition. This means the world to me. Badminton is the pinnacle.”

Townend said: “I’ve told Sam to enjoy every minute of this because it still hasn’t quite sunk in that I’ve won this event [in 2009].”

He added: “I’m thrilled with my result. I was mortified after the Dressage [after which he was 34th] but this has made up for it. The reason Armada is good across country is because he is tricky in the other two phases. It is a fantastic feeling to be sitting on a Ferrari like him. At certain points yesterday, I felt that this was what Cross Country was all about.”

Harry Meade’s third-place finish is all the more remarkable because he spent months lying helpless in hospital after breaking both elbows in a fall last August. “At the start of the week, I was beyond expectations, but somehow everything added up and I feel that I coped very well,” he said. “My arms felt fine on the Cross Country and I loved the fact that it was windy and wet.”

Meade, who lives only three miles from Badminton and whose father, Richard, won here in 1970 and 1982, explained: “I couldn’t let myself get too excited and today I’ve felt calm and determined to enjoy it. The last few months have rather put things into perspective for me.”

Fourth-placed Tapner managed to be philosophical in defeat. “You start thinking of damage limitation when you hear those rails falling and I tried to change my way of riding. But that’s the way the sport is. I’ve been in both positions here before. One went my way [when he won in 2010] and this one didn’t.”

Pascal Leroy (FRA) dropped from third to fifth on Minos de Petra but still achieved the best result for a French rider since Nicolas Touzaint won in 2008. Three-time winner Pippa Funnell (GBR) held onto sixth place on the exciting prospect Billy Beware with one fence down and four time penalties.

Tim Price (NZL) had warned that Jumping was Ringwood Sky Boy’s weakest phase and he dropped from second to ninth with 19 faults behind Tim Lips (NED) on Keyflow NOP, seventh, and Sweden’s rising star Ludwig Svennerstal on Alexander, eighth.

All 32 horses presented at the final Horse Inspection passed, including Wendy Schaeffer’s (AUS) Koyuna Sun Dancer, which was sent to the holding box. Schaeffer successfully appealed the 20 penalties given for a refusal at the Mirage Pond (fence 16). This elevated her from 26th to 18th before Jumping and then she produced the only clear round of the day (albeit with three time penalties) to rise to 12th.

Although Pau (FRA) and Kentucky (USA) winner William Fox-Pitt surprisingly played no part in the final day at Badminton, he is still the clear leader, by 15 points, in the FEI Classics™. However, Sam Griffiths’ Badminton victory elevates him straight into second place and he and other riders still have chances at Luhmühlen (GER) next month to try and catch up before the series finale at Burghley (GBR) in September.

Griffiths grew up near Melbourne riding his mother’s home-bred Welsh ponies, did a university degree in geography and went travelling, taking a job with the New Zealand Olympic champion Blyth Tait. He has been based in the UK since 1995.

His best results came with Happy Times, winner of Saumur CCI3* in 2008 and third at Badminton and Burghley in 2009. They were on the Australian team at the 2010 FEI Alltech World Equestrian Games™ and at the London 2012 Olympic Games.

Sam and his wife Lucy live on the Somerset/Dorset border and have a young son, Ollie.

Paulank Brockagh was bred in Ireland, on a hill called Brockagh, by Frank and Paula Cullen, after whom she is named. She is a 10-year-old Irish Sport Horse by Touchdown out of a Triggerero mare, and finished 15th at Burghley last year.

The Mitsubishi Badminton Horse Trials Twitter handle is @bhorsetrials and hashtag is #MMBHT.