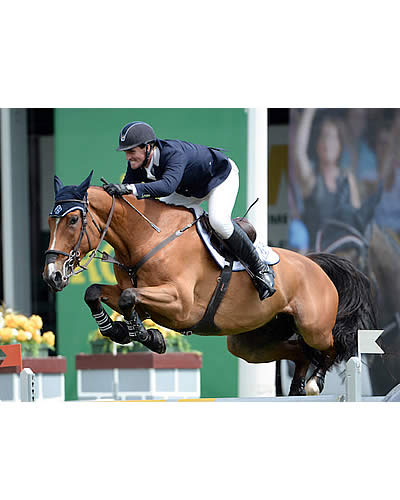 Continuing through Sunday, July 5, the ‘North American’ Tournament boasts $1.3 million in prize money across 14 FEI events throughout the week. Highlights include the $400,000 ATCO Power Queen Elizabeth II Cup on Saturday and the $210,000 Cenovus Energy Classic Derby on Sunday.

Wednesday’s win marks the second time that Judge has won the first competition in a CSI 5* tournament this summer. He also topped the first 1.55m competition of June’s ‘National’ Tournament aboard HH Copin van de Broy.

“I have been really lucky to win the first classes at these two tournaments,” Judge noted. “My horses really like this ring, so I just try to make a good plan for each week and put the right horses in the right competitions.”

Wednesday’s win also marks a significant moment in Judge’s partnership with HH Whisky Royale, who he has been riding for several years.

“This is definitely his biggest win,” Judge remarked. “This is only his third 1.55m. He was really good the first week here, finishing clear and with four faults in two 1.55m competitions. Now after two weeks off, he came right in and jumped this. It is really special for us because this is a horse that we have had a long time. He is a horse that maybe some people did not believe in when he was young because he was so big and so gawky, but he has really come a long way.”

Speaking of Whisky Royale’s powerful jumping style, Judge noted, “He is a huge horse and he has such a big stride. He kicks really hard over the jumps and it definitely took me a while to get used to that, but he gives you a very good feeling as a rider because you know you will pretty much never have a back rail down.”

The course saw twelve clear rounds in total, and the times got faster and faster. Shane Sweetnam (IRL) jumped an early clear round in 66.10 seconds with Sweet Oak Farm’s Easy Contact Humlan to eventually place third. Several rounds later, Conor Swail (IRL) upped the pace in 65.62 seconds with Ilan Ferder’s Viva Colombia to ultimately finish second. Richard Spooner (USA) was fast and clear with Show Jumping Syndication Intl’s Cristallo in 66.39 seconds to jump into fourth. Quentin Judge and Double H Farm’s HH Quator had a great round in 68.51 seconds to take fifth place. Parot immediately followed, speeding through the timers in 63.92 seconds for the win aboard Couscous van Orti.

“This is the first time I have come to Spruce Meadows and my first victory here,” Parot smiled after his win. “The first week (of the Summer Series) I had third place, fourth place, fifth place, and then I broke my clavicle on the last day of the first week. The second week I tried to jump, but it was not possible, the pain was too much. I waited two weeks and began again last week. It still hurt a little bit last week, but this week it was better.”

“It is super to win here. This is an unbelievable place – the people, the organization. I think Spruce Meadows and Aachen are the most important shows in the world and a win here is important,” Parot continued. “Here, you have the top riders in the world. A win is a win, but here it is very important.”

Parot is based in Wellington, FL for six months of the year and normally spends the rest of the year competing in Europe, but with the Pan American Games coming up in Toronto in July, he chose to make his first trip to Calgary. Parot has been named to the team that will compete for Chile in the Games, and Couscous is a horse that he bought as a possible mount just one month ago. Belgium’s Pieter Devos previously rode the gelding to great success and Parot looks forward to getting to know his new mount further in the coming weeks.

The final competition on Wednesday was the $34,000 PwC Cup 1.50m with a speedy win for Andres Rodriguez (VAN) and Arao Enterprises LLC’s Fifty Fifty 111. Juan Pablo Gaspar Albanez (MEX) and Felipe Gaspar’s Puertas So What were first to go and laid down a blazing fast time of 66.215 seconds that held on through 33 competitors for second place. Halfway through the order, Rodriguez and Fifty Fifty 111 stole the show with their winning time of 66.096 seconds.

“It is amazing (to win again),” Rodriguez smiled. “This is the first day of one of the biggest competitions of the summer and it is amazing to win the same competition that I won four weeks ago. This is the third time the mare has been out this summer, and she has won two competitions and she also got a good ribbon in the derby, so it feels great.”

“She is getting a bit more accurate,” Rodriguez said of Fifty’s development this summer. “To have a horse that can come in the ring and win two out of three times, it is a great horse.”

“There were a lot of great horses in that competition today,” Rodriguez continued. “We had HH Carlos Z, we had Rosana du Park, some amazing horses and riders. When Juan Pablo Gaspar went in the beginning, I thought that he had won the class. We needed to take some risks to try to get his time. Then after I saw McLain (Ward) and Eric (Lamaze) going after Juan Pablo, and not being able to catch him, I knew we had to go all in. I missed one distance to the coin jump. I was thinking of doing eight strides, but I landed on the outside, so I did nine strides. Then I was trying towards the end to get the time back. I got a little bit of a flying distance to the one oxer at the end. That was a big risk, but I think that is where I got the time.”

“I knew coming in that if someone beat Juan Pablo, it was not going to be by much,” Rodriguez said of his narrow margin of victory. “He did not leave much in the ring. He did all of the distances the right way and he was in the right rhythm. It is very impressive for a kid to come here and just lay something down like that. For him to go first, not really knowing how the class was going to turn up, and put in a round like that was really good.”

Santiago Varela set some excellent tracks on Wednesday that were not only great for the horses and riders, but also great for the crowds that turned up to watch the competition while celebrating Canada Day.

“The courses today were really good,” Rodriguez acknowledged. “I thought the 1.55m was an amazing course. There were some big jumps, but everything rode very smooth, and I think both 1.50m courses were very good. I think the crowd liked it. The rounds were fast, and people were really trying. That is what a course designer is always trying to get: they want to entertain the crowd and get a good competition, and I think he achieved that today.”