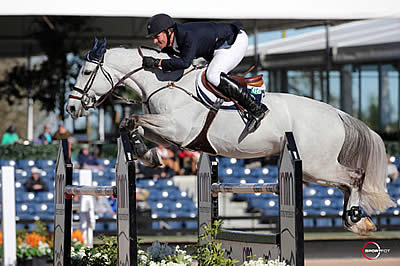 FTI WEF will continue with its fourth week of competition, sponsored by Ariat, on Wednesday, January 29, through February 2. The FTI WEF, held at the Palm Beach International Equestrian Center in Wellington, FL, features 12 weeks of world-class competition through March 30, awarding $8 million in prize money.

Brazil’s Guilherme Jorge set the course for Sunday’s 1.50m with 53 entries and 13 clear rounds to advance to the jump-off with seven double clears. Quentin Judge and HH Dark de la Hart completed the fastest clear round over the short course in 38.21 seconds for the win.

HH Dark de la Hart is an 11-year-old Belgian Warmblood stallion by Kashmir van Schuttershof x Nonstop that Double H Farm purchased last winter. Judge has had many top finishes with the horse, including a win in the $35,000 Husky Energy Cup 1.50m at Spruce Meadows this summer. The pair was also a part of the winning U.S. Team in the eighth leg of the Furusiyya FEI Nations Cup Division 2 series in Bratislava, Slovakia, in August.

Commenting on their partnership, Judge noted, “I have had him for a little bit over a year, and he was my main horse last year. This year we have a few new horses to kind of share the work load with him, so I was able to drop him down to do the 1.50m and some smaller classes. He is so fast, and he has been great.”

“It took me a little bit of time to figure him out because he is not a huge horse, and I am a tall rider,” Judge detailed. “I used to put a little bit too much pressure with my leg on him, and he would get a little angry and antsy. Now I try to sit still and keep him relaxed, keep him straight, and just try to have good position and he does the rest.”

Judge spoke about Sunday’s course and the skills that helped his horse earn the top time. “I thought the course was great,” he stated. “It was not huge, but it was technical. In general it was a nice course and the time allowed was tight, but not killer, so that suited everyone well, and it suited my horse really well. The jump-off was great because it gave me a chance to gallop, and my horse is really good at jumping on angles. I can really slice into the double and slice an oxer and he sights the jumps really early and jumps them clear, so it was good for me.”

One of HH Dark de la Hart’s charming qualities is the fact that he shows a lot of character on course. On the way to Sunday’s winning round, he was his usual enthusiastic self.

“He has a lot of personality,” Judge noted. “He is very quiet and very chill at home, but when he gets in the ring he is very fast and he loves to buck. He loves to put on a little bit of a show. If he jumps a hard jump, he always lands and bucks afterwards. Now I know that it is coming, it just means that he is trying hard and jumping well, so it’s a good feeling.”

HH Dark de la Hart will now have a few weeks off as Judge focuses on some of Double H Farm’s new horses and up-and-coming young talents, and will continue in the 1.50m classes.

The 2014 FTI Consulting Winter Equestrian Festival will host its fourth week of competition, sponsored by Ariat, from Wednesday, January 29, to Sunday, February 2. The week will feature the $34,000 Ruby et Violette WEF Challenge Cup Round 4 on Thursday, the $34,000 Suncast 1.50m Championship Jumper Classic on Friday afternoon, the $10,000 Artisan Farms Young Rider Grand Prix Team Event presented by The Dutta Corp. in Association with Guido Klatte at The Stadium at PBIEC on Friday night, the FTI Consulting Great Charity Challenge presented by Fidelity Investments on Saturday night, and the $50,000 Ariat Grand Prix CSI 2* on the derby field at The Stadium at PBIEC on Sunday afternoon.

Sixteen-year-old Vivian Yowan and her 13-year-old Warmblood gelding Shockwave were division champions of the EnTrust Capital Small Junior Hunter 16-17 division at FTI WEF on Sunday morning. The pair won both over fences rounds on the first day of competition for the division before placing third under saddle and first and third in the final over fences rounds. Yowan also received the Champion Owner/Rider Award for her win with Shockwave.

The reserve champion for the division was Bravado, owned and ridden by Kelsie Brittan. Brittan also took home Reserve Champion Owner/Rider honors. The pair were second in three over fences classes and won the under saddle class.

Shockwave used to be a familiar face in the junior jumper divisions, but Yowan believes the big bay gelding is transitioning smoothly into life as a hunter.

“He’s only been doing the junior hunters for a year. He’s definitely figured it out now that he’s supposed to be doing the hunters, so he’s gotten pretty good at it. I think he likes his job better now,” Yowan explained.

Yowan, of Lexington, KY, made the switch with Shockwave to the hunters with the help of trainer Kelly Goguen of Boggs Hill Farm, also based in Lexington. The hardest task was simply getting Shockwave to take it easy, especially in combinations or long lines.

“At first, he got quick down the lines or in the doubles because he was so used to being ridden at the jumps in the jumper ring. We were just trying to get him to really relax,” Yowan detailed.

While the pair had to practice a lot of jumps at first, Yowan said now she simply jumps a few jumps at home and can be set for competition. The raw talent that brought him to the hunter ring in the first place has actually proved useful for hunter divisions.

“It doesn’t matter what the course is, he’s always straight-forward. He obviously has the scope, so you feel comfortable doing anything out there. Especially the handy rounds!” Yowan smiled.

She continued, “He has such a big stride that if you’re a little long or a little [slow] in the lines, he can cover it up. He goes slow around the course, but he has so much stride that it makes it really smooth. He jumps really well.”

Yowan and Shockwave’s victory concluded hunter competition for the third week of the FTI WEF.