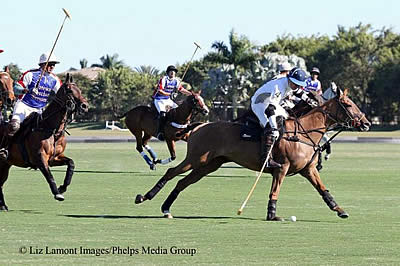 Palm Beach Illustrated came into the game with a solid strategy. “We planned on rotating the ball and hitting it to open places,” said Tommy Collingwood. “The idea was to just keep hitting it forward and keep a rhythm going.”

The strategy seemed to work well for Palm Beach Illustrated, which has a very balanced roster in terms of players’ handicaps. The team frequently created mismatches on coverage and had open players going to goal.

“We knew there would always be someone open, so we just kept hitting it forward or hitting the quick backshot,” said Jared Zenni, who was recently selected for Team USPA. As the players shivered in the tent after the game, Zenni added vehemently, “That was really cold today!”

The teams were playing polo in a polar vortex, but the blasts of chilled air did not slow down the match. Mariano Obregon quickly ran to goal to start the scoring off for Gateway Merchants, adding to the automatic goal awarded the 19-goal Gateway Merchants team. His score was immediately countered by an answering run from his brother, Facundo Obregon, who followed up with an awesome neckshot from 65 yards out from goal. Michel Dorignac tallied another field goal for Palm Beach Illustrated to close out the chukker (with a lot of help from Zenni, who cleared the path to goal).

Facundo Obregon continued his scoring ways through the second and third chukkers, adding two penalty goals and a field goal off a pinpoint pass from Dorignac. Matias Magrini converted a penalty 4 in the third chukker to keep Gateway Merchants in the hunt, but Palm Beach Illustrated still held a comfortable 6-3 lead to close out the half.

In the fourth chukker Facundo Obregon made two more goals, sandwiched around a Mariano Obregon field goal, for Gateway Merchants. The brothers seemed to share a genetic affinity for the same part of the polo field, as they marked each other closely throughout the game.

Palm Beach Illustrated will face off against Tonkawa in the Haas Cup Finals on Sunday at noon at IPC.