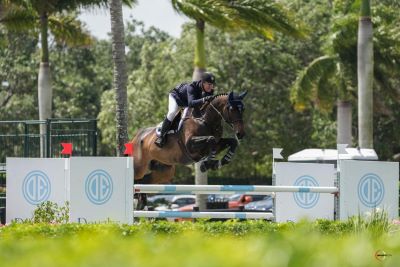 Guilherme Jorge (BRA) designed a flowing track that used a vast majority of the field to test its 54 contenders. The two-phase course included a total of 15 obstacles with the first phase to be completed in 44 seconds and the second phase having a time allowed of 43 seconds. Jorge’s elements included several double combinations as well as a water obstacle to test some of the world’s best competitors. Eleven nations were represented in the original starting lineup with Mexico’s Eugenio Garza Perez holding on to the lead at the halfway mark of the event.

Ward piloted the 13-year-old Oldenburg mare Noche De Ronda (Quintender 2 x Lovis Corinth), a horse he co-owns with Marilla Van Beuren and Bob Russell, to the top position after the pair stopped the clock fault-free and with a time of 30.81 seconds.