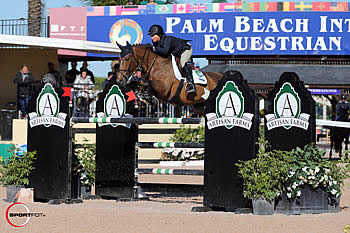 Wellington, Florida – This year’s Artisan Farms Young Rider Grand Prix Series (AFYRGPS), presented by The Dutta Corp. in association with Guido Klatte, has been bigger and better than ever.  Now in its fourth year, the AFYRGPS has attracted more than 50 entries competing for increased prize money as well as FEI sanctioning.  Following three exciting qualifying events, the top 30 riders in the overall standings will contest the $50,000 CSIU25 Artisan Farms Young Rider Grand Prix Final on the grass derby field at The Stadium on Sunday, March 23, at 8 a.m.

“We have been thrilled with the response to this year’s AFYRGPS, and are proud to have taken it to the next level by increasing the prize money and obtaining FEI sanctioning for this week’s Grand Prix Final,” said Carlene Ziegler who, with her husband, Andy, owns Artisan Farms.  “When we started the AFYRGPS four years ago, it was our intent to create a program that provided a bridge from the junior and amateur divisions to the grand prix level.  We feel it is very important to provide the next generation with a spring board that is both relevant and beneficial as their careers progress.”

Following Sunday’s Final, the overall winning rider will receive a Bruno Delgrange saddle valued at $6,000, and will be presented with an invitation to compete at the CSI2* Chantilly Horse Show, part of the Global Champions Tour, held from July 25-27 in France.  In addition to their entry, the winner also receives two tickets to the Chantilly VIP lounge and transportation for one horse generously provided by The Dutta Corp. in association with Guido Klatte.  One lucky participant in the AFGPYRS will also win a one-year sponsorship, valued at $5,000, with equestrian clothing apparel company, Equiline.

Riders aged 16 to 25, regardless of nationality, are eligible to participate in the AFYRGPS, which provides a valuable stepping stone from the junior and amateur ranks to the grand prix level.  Featuring fences set at 1.45m, the AFYRGPS offers four events held in three different venues, exposing developing grand prix riders to everything from competing on grass and in a team format, to jumping under the lights at night.