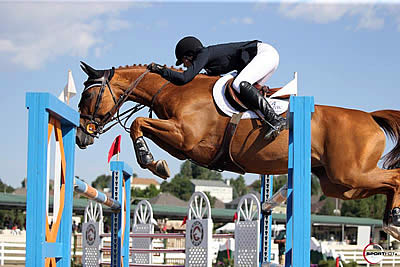 Sophie Simpson and Why Not (Sportfot)

The Young Rider division saw the Gold and Silver medal positions only separated by a slim margin as the Region 1 team earned a total score of 200.605 and the combined Canadian team totaled 200.210 to end the competition. The Bronze medal team, composed of riders from Regions 4/5/7, finished with a total score of 196.421.

Nicholas Hansen of Catawissa, Pa. and his mount Ritter Benno earned the highest score of the class and anchored the Region 1 team with score of 72.263%. Hansen, who is competing at NAJYRC for the third time in his career, commented on the importance and impact of the competition, as well as how it has molded him as a rider.

“I think that this competition is invaluable. When you have an opportunity to compete against people who are riding at your level, but then have a chance to ride against people from different countries at the same time, you form bonds that you have for the rest of your life,” said Hansen. “To have the ability to say that you went to NAJYRC, and when you’re able to put that on your resume, I think that’s something not many people are able to do and it’s a huge accomplishment.”

“It’s great to be here and the connections you make with the other riders are so important. This experience is priceless,” added teammate Chambers, who piloted Urithmic to a score of 64.474%.

The Gold medal-winning team of Region 1 earned their total score of 200.605 in part to the solid and consistent riding displayed by each of the four members composing the team:

Canada’s combined team featuring riders from Ontario, Manitoba, and Alberta, collected the Silver Medal for the Young Riders Team division with a total score of 200.210:

“I think the special part of this competition is that you have fun and that’s my goal,” said Ferguson. “That is what makes this show so unique. It’s about setting goals, having fun, but also having positive experiences in the ring and that’s what’s so special about this competition.”

“We really want to keep this good vibe going with good rides. I think each of us want to have a clean test and that in itself is so worth it at this competition,” commented Forde, when discussing her ride this afternoon aboard File Della Caccia and what she’s looking forward to for the remainder of the week.

The Bronze medal team combined three horse and rider combinations representing three different states including California, Kansas, and Colorado. The team featured two riders who have previously competed at NAJYRC, and one rider who is competing for the first time at the competition. Each of the three riders were proud to represent their own respective regions in a combined team setting, scoring well throughout the morning and ending the day thrilled with their podium debut.

The Bronze medal team earned a total score of 196.421 for their efforts on the first day of competition:

“It’s been a really fun experience to now have a team and actually be able to bond with our combination region. It’s really wonderful and it’s something that we don’t have in any other aspect of the sport at this level,” explained Harrison. “It’s really helpful to and encouraging to be on a team with people who support you and want you to do well.”

Horse and rider combinations were able to test their skills for the first time in the main competition arena at the facility, as the class featured 23 entries. Sophie Simpson (18, Westlake, Calif.) and Why Not capitalized on their first trip around the International Ring, capturing the win with a total score of 37.72, while loftier goals lie ahead of the duo in the team and individual portion of the competition.

Christine Firestone (21, Upperville, Va.) and Arwen finished in second place behind Simpson with a score of 38.15, while Mackenzie Drazan (21, Woodside, Calif.) and Waliba VDL rounded out the top three earning a score of 38.19.

For more information on NAJYRC and to see a full list of results please visit www.youngriders.org or www.coloradohorsepark.com.

By The Colorado Horse Park/USEF