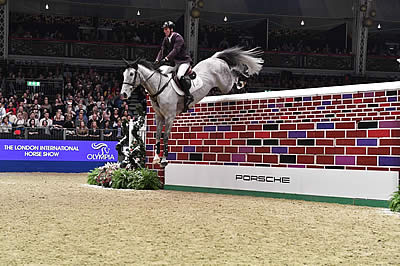 Day three of Olympia, The London International Horse Show attracted a sell-out crowd for The Cayenne Puissance, one of the star attractions of the week-long event. The Puissance title was eventually shared by Great Britain’s Guy Williams (Mr Blue Sky UK) and France’s Mathieu Billot (Dassler), after both pairs cleared the formidable 7ft 4in (2.23m) high ‘red wall’ in the fifth and final round.

The opening day of the Show Jumping competition was certainly one to remember for Darragh Kenny. The 30-year-old Irishman (Cassini Z) first pipped Great Britain’s Robert Whitaker (Catwalk IV) by just one hundredth of a second to take top spot in The Santa Stakes supported by Olympia. Kenny then made it a memorable double after he and his 10-year-old bay gelding, Carlson, fought off a valiant effort from Great Britain’s William Funnell (Billy McCain) to take the honours in The Musto Inside Edge Stakes. The afternoon performance of the Osborne Refrigerators Shetland Pony Grand National was won by Meredith Reader-Smith and Holydell Poseidon, while the evening performance was won by Poppy Dadson and Merkisayre Sea Duble.

After Smith’s faultless start, Bradburne raced against the clock with the Irish-bred pony her brother, Thomas, had finished third with in this class last year.

“Holly advised me to try not to let my nerves get to me, and act like I was at home… but go a bit faster,” said Bradburne, a member of the Old Berkshire Hunt branch of the Pony Club.

However, Bradburne is well bred when it comes to jumping at speed over fences. She comes from a family steeped in racing history. Her parents are successful former jockeys, Gee Armytage and Mark Bradburne, with her uncle being 1990 Grand National winner, Marcus Armytage.

A thrilling Cayenne Puissance class had the crowd roaring with excitement at Olympia, The London International Horse Show when four riders took on the 7ft 4in wall in the fifth and final round.

Only two, however, managed to leave all the bricks intact: Britain’s Guy Williams on Mr Blue Sky UK and French rider Mathieu Billot on Dassler, a horse jumped in the 2017 Cayenne Puissance by Louise Saywell.

The wall was at its highest since 2006, when John Whitaker, Robert Whitaker and Markus Fuchs shared first prize, also at 7ft 4in. Coincidentally, Williams, who lives in France, and Billot had shared the spoils in a puissance class in Rouen recently, jumping the same height.

“C’est magnifique!” said an elated Billot, who was paying his first visit to Olympia.

Williams is considering trying for a record on Mr Blue Sky because he jumps so smoothly. The horse has been taken slowly because of his height and has had some dressage training to calm him. “He makes it look easy but he’s actually quite sharp and nervous and he becomes strong to ride,” Williams explained.

Darragh Kenny’s Olympia got off to a splendid start with a double of victories. The Netherlands-based Irishman took the Santa Stakes on Cassini Z and set an unmatchable target of 48.56 seconds on Carlson in The Musto Inside Edge Stakes, a speed class. For good measure, he was also second in the opening Welcome Stakes on Billy Dorito behind Dutch rider Doron Kulpers on Freestyle. “It’s been a great day – it’ll probably all go downhill from here on,” he joked.

Kenny plans to ride Cassini in the Longines FEI Jumping World Cup™ on Saturday, but might consider Carlson, a new ride, in the Turkish Airlines Olympia Grand Prix on Sunday: “He’s a special horse, competitive and brave. I think he’ll be good.”

The Pony Club Mini-Major, a special class in which Pony Club members have the unforgettable experience of being paired with senior riders in Olympia’s atmospheric arena, was won by Holly Smith and Old Berkshire Hunt member Katy Bradburne, whose parents, Mark and Gee (Armytage), were successful National Hunt jockeys.

Harry Charles may not have won a class, but he collected two awards for the most promising under-25 rider: The Raymond Brooks Ward Trophy, presented by brothers Simon, James, and Nick Brooks-Ward in memory of their father, and a saddle from the Worshipful Company of Saddlers as voted for by members of the British Equestrian Writers’ Association.