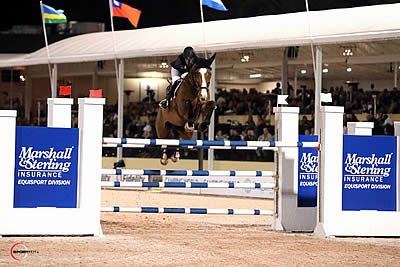 Out of a starting field of 45 entries, nine found the way to a clear round to advance to the jump-off over a course set by Oscar Soberon (MEX). Coming back sixth in the jump-off, it was Michaels-Beerbaum and Calle 67, a nine-year-old Westphalian gelding by Carell x Capitalist, who had the fastest clear round in a time of 36.85 seconds to take the win.

Second place went to 21-year-old Lillie Keenan (USA) and Chansonette Farm’s Skyhorse in a time of 37.01 seconds, while Emily Mason (GBR) placed third in a time of 37.58 seconds with Explosion W, owned by Poden Farms.

While Michaels-Beerbaum and Calle 67 competed in the young horse classes under the lights at Aachen CHIO, she did say that Saturday night’s grand prix was “a major step up for that horse.”

The E. R. Mische Grand Hunter ring featured an exciting championship win for Becky Gochman of Wellington, FL and her mount of three years, Catch Me. Gochman piloted the 11-year-old Holsteiner gelding to a first, first, and seventh over fences with a win in the under saddle in the Hunt Ltd. Amateur-Owner Over 35 3’6” Division. The pair scored an impressive 87 and 88 to claim the blue in both jumping classes.